There were two shipments from National Gypsum this weekend, one on Atlantic Huron, bound for Bayside, NB and the second on Harment Oldendorff for Baltimore.

It has been some time since the latter ship visited Halifax. It first called here in 2007 and has been an off an on visitor, but rarely in recent years. Its last few movements indicate it has been operating in Europe or farther east. It was on the St.Lawrence to Montreal last week on a voyage from Casablanca. The ship operates in the CSL Americas pool with CSL and Algoma. 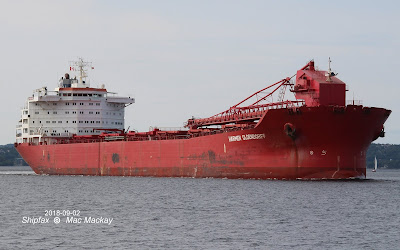 The ship was built in 2005 as a Panamax bulk carrier by Damen Okean in Mykolayiv, Ukraine, which may explain its unsual if not unique, angled superstructure. Converted to a self-unloader in 2006 , it now measures 42,033 grt, 66,187 dwt, which means it cannot take a full load at the National Gypsum dock in Burnside. Its self-unloading apparatus is mounted forward, (a much easier installation to make as a conversion) and can discharge at a rate of 4,000 tonnes per hour. Its unloading boom is 76 meters long and can extend outwards at an angle of 95 degrees. 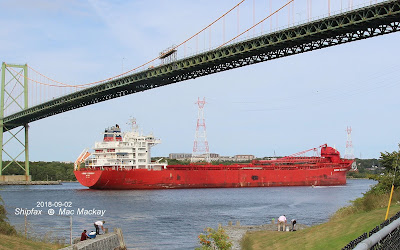 Clearing the MacKay bridge with room to spare as anglers set up to fish for mackerel from Seaview Park.

Harmen Odendorff  is bound for Baltimore, the port that Algoma Integrity has been serving lately, but that ship is bound back to work within Canada for a three month stint under a coasting license. It will shuttle from Port Cartier to Contrecouer with iron ore pellets, and monthly from Port Cartier to Lower Cove, NL with aggregates. It is expected to transfer 525,000 tonnes of pellets and 150,000 tonnes of stone from September 12 to December 11 in a tightly choreographed schedule before winter freeze up. 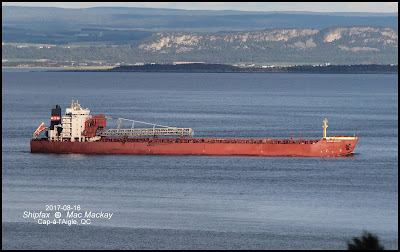 Algoma Integrity will be returning to the St.Lawrence shuttle service, but not under Canadian flag.

The ship served essentially the same route for three years before returning to foreign flag in April of this year. It then began calling in Halifax to load gypsum for Baltimore.
.
Posted by Mac at 7:57 PM