Seeing the same ships several times poses challenges for original photos. The same ship in the same place over and over again begins to dull the senses. Fortunately today, although the ships were the familiar, there was something different.

When USS Arleigh Burke sailed this afternoon, the sun was on the Halifax side of the ship - unlike morning arrivals, which is the usual time to see warships.

Name ship of its class, Arleigh Burke is proceeding cautiously as it leaves Halifax.

Also of course there is the desire to take the photo from forward, but a going away shot can provide some interest too. The ship arrived September 7 and was able to stay in port for a few days. Its May 10, 2017 visit was much briefer, arriving at 1000 hrs and sailing at 1600 hrs.

The autocarrier Elektra is such a regular caller, that I don't photograph it often.  Built in 1999 the ship is still in fine form despite its age. Classed as a Large Car and Truck Carrier (LCTC) it has a capacity of 7,194 cars. This is partly thanks to the 2005 lengthening that increased the ship's grt from 57,018 to 67,264.

Elektra moves from Autoport to pier 28 to off load some non-cars.

Original builder of the ship was Daewoo Heavy Industries, Okpo and the lengthening operation was carried out by Hyundai-Vinishin in Vietnam. A new section of nearly 30 meters was added, increasing the ship's capacity by 20%. It was the first of five Wallenius ships to get the upgrade.

The tanker Alpine Venture was here once before, and that was March 14, 2017, also from Antwerp.  Predictably it was built by Hyundai Mipo, Ulsan and is 29,130 grt, 46,046 dwt. On that last visit it had to move to Bedford Basin to wait out a storm. That is unlikely to happen this time. 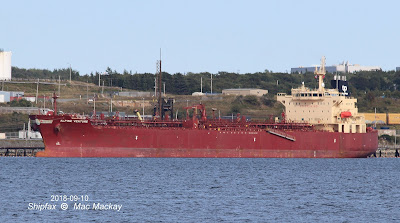 When the ship was here last, most of the refinery was still intact, although de-commissioned. It is all gone now except for the tanks.

Another regular caller, usually seen approaching or sailing from Halterm is Bomar Rebecca. Plowing a regular furrow for Tropical Shipping, it calls every second Monday, regular as clockwork. Today however was different. It unloaded completely, then moved in ballast to pier 25-26.

It is unusual to see a container ship underway in ballast.

Because Hurricane Florence is expected to make shore in the Carolinas later this week, the ship is taking a trip off. It may also be an opportunity for some maintenance with the ship idled for a week. Its counterpart calling alternate weeks, Asian Sun is likely sitting this one out at the southern end of the route. It will not be calling next Monday, when Bomar Rebecca is scheduled to sail.