To use some waterfront jargon, the port was mostly pax (passengers) and cans (containers) this weekend. There was little other traffic to mention - no tankers, no bulkers, etc.,

On Saturday it was the always impressive Mein Schiff 6, the TUI Cruises ship, built in 2017 by Meyer Turku Shipyard. It made its first visit here September 2, 2017. The 98,811 grt ship has a capacity of 2,790 passengers, and appeared to be at capacity judging by the number of people on deck on departure. 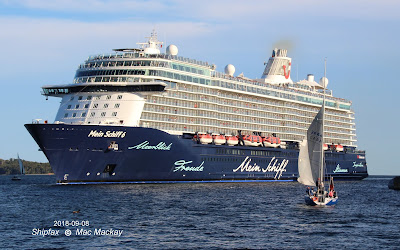 On Sunday, the familiar Serenade of the Seas was joined by the Norwegian Dawn. The latter was re-directed here from its Boston / Bermuda trip by the developing Hurricane Florence. This may be the ship's first time here, since built in 2002 by Meyer Werft, Papenburg. The 92,250 grt ship can carry 2340 passengers.

Serenade of the Seas (left) at pier 22, stern to Norwegian Dream at pier 20 (right).


Even though the re-direction was a last moment one, some passengers opted to take a pass, but those that decided to stay were flocking ashore today in Halifax to buy sweaters. Granted it is cooler in Halifax than it would be in Bermuda, but the press made our climate as nothing short of polar.

The ship is infamous in  my mind for introducing "hull at" - that form of licensed graffiti that now defaces cruise ships throughout the word enough said.

MOL Paridise threads its way through the Narrows - apparently effortlessly - despite the presence of pleasure craft.

The tug Spitfire III heels as it assists the ship to make a course correction inbound.

Things were easier going as the ship transits the Narrows.