The waterfront was abuzz this afternoon with four cruise ships in port and a fifth on the way. The earliest arrival this morning was Serenade of the Seas followed an hour later by Silver Spirit.
This is not the first call for Silver Spirit, but is the first visit since its $70mn (US) upgrade earlier this year. 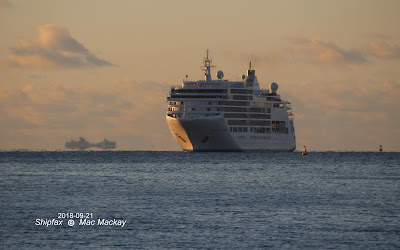 Silver Spirit is inbound, while Celebrity Summit makes its way toward the pilot station from sea. 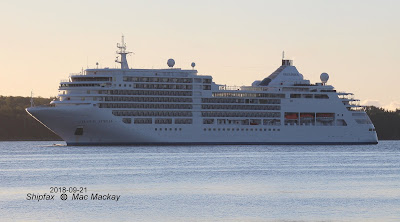 Now with a sort of swayback look, the longer ship looks unfinished.

Built in 2009 by Fincantieri, Ancona, the ship had a capacity of 540 passengers and 376 crew and measured 36,009 grt.  This past spring it went into drydock at Fincantirei Paleremo where it was cut in two and an already built 15m section was inserted just about midships. The new section, and other extensive renovations, increased the ship's tonnage to 39,444 and capacities to 608 passengers and about 396 crew. 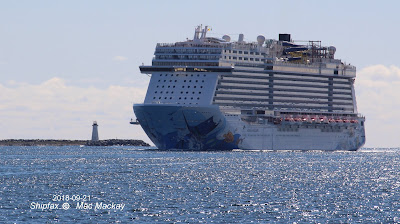 At noon  time the large Norwegian Escape made its inaugural call in Halifax. With a capacity of 4,266 passengers and 1733 crew, it easily dwarfs the other ships in port. The "Breakaway Plus" class ship  was built in a remarkably short 17 months by Meyer Werft, Papenburg. Its $1.5 bn price tag bought 165,157 gross tons.

The ship turned effortlessly in number one anchorage and backed in to pier 22.

The fifth ship to arrive today, will tie up in mid-afternoon. The Halifax built Pearl Mist, a regular caller, will remain in port over night.