The old Halifax saying "If you don't like the weather, wait 15 minutes" certainly proved true today (although it was apparently not in  effect Thursday and Friday.) A gray drizzly day greeted early arriving cruise ship passengers this morning. It didn't seem to dampen the spirits of the largely British guests from P+O's Aurora. 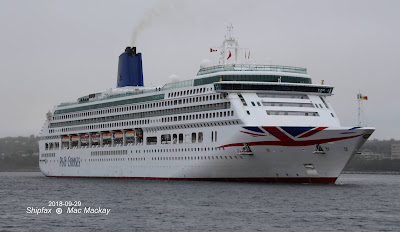 By noon time however there was a complete about face as a largely cloudless sky emerged with a balmy 20degree C air temperature. This was the greeting for an unusual mid-day arrival of AIDAviva.

Unlike the earlier arrival, the decks were crowded with passengers, one in particular occupying the "pulpit" position at the very tip of the bow, as the crew rigged heaving lines from the docking platform. 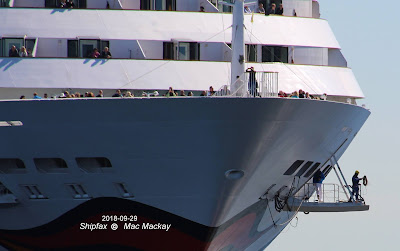 It was still clear for the departure of Crete I from Fairview Cove.

and for the arrival of the CMA CGM Elbe for Halterm.

Its bow pulpit was occupied by one solitary sailor - his shipmates likely busy out of sight with their headlines. 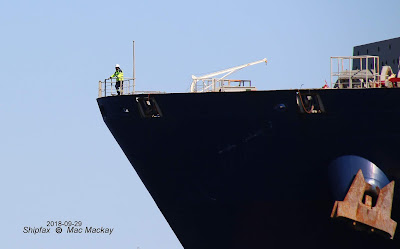 The departing Pearl Mist had perfect conditions too. 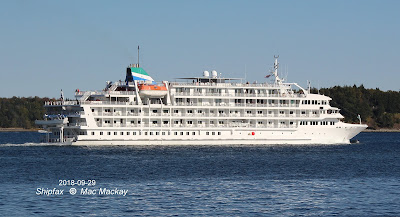 Cloud began to build in a bit as Aurora sailed, but that merely helped to reduce the glare off the whiteness of the ship. 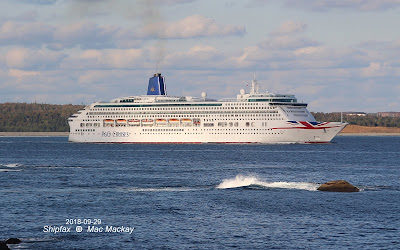 The sun was also shining brightly on the dazzle painted Sackville as it sat on the Synchrolift at HMC Dockyard. It has finally emerged after several months in the submarine shed for replacement of wasted hull plates. The work should ensure that the last surviving World War II corvette can remain afloat for some time to come. 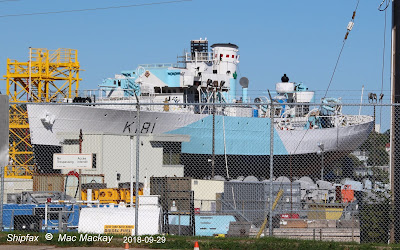 Since all the ships noted are familiar visitors to Halifax, I have foregone the usual technical info, as it has appeared in earlier posts.