The research vessel Ocearch has successfully tagged a pair of great white sharks off Nova Scotia. The US flagged vessel, was in Halifax before going out on this latest operation . 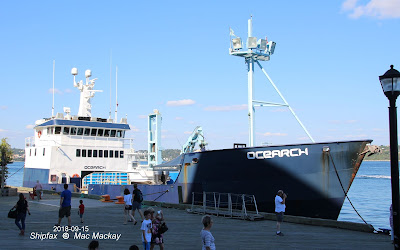 Ocearch tied up at the Tall Ships Quay. Classed as a yacht, it did not have to dock behind the port's security perimeter.

Built in 1990 by Horton Boats of Bayou La Bâtre, AL, it was originally the Alaska king crab fishing vessel Arctic Eagle featured on several TV documentaries. In 2004 the US government bought back a number of king crab licenses and the ships was converted to a sport fishing mother ship named Ocean Discoverer, then simply Ocean. That is essentially what it is today, but instead of only catching game fish, it is now used to tag sharks, turtles and other sea life including seals as it travels around thw world. (The ship had a 16,000 mile range before it needed to re-fuel in its king crab days).

The controversial shark tagging process involves attracting the sharks with what is politely called "chum", then catching the fish with rod and real. A big  Contender 28T boat, with a pair of 300 hp Yamaha outboards, coaxes the fish over an elevating platform that hoists the fish aboard. It is very quickly tagged, measured and released. The well funded and media savvy Ocearch has its critics, who state that more passive tagging methods are less likely to disturb the fish in their normal habitat. I will leave that to the scientists to sort out. 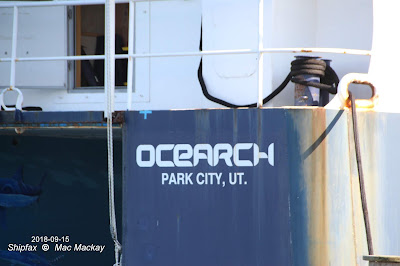 Ocearch It is likely the first ship to call in Halifax that is registered in Utah.