Two American built vessels made appearances in Halifax this morning.

The cruise ship Victory II was in only briefly en route from the Great Lakes to Gloucester. After a somewhat late start due to an extensive refit, the ship missed its inaugural call in Halifax June 2, but was able to enter service in July in Detroit (after a mandatory pre-Seaway call in Montreal). Its first call in Halifax was August 15. 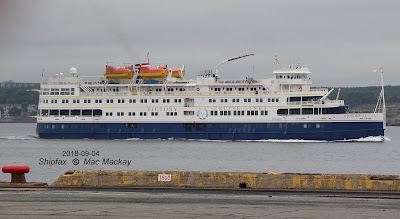 Now completed with its Great Lakes tour season, it will carry out New England / Maritime cruises for the autumn. Built as  Cape Cod Light in 2004 by Atlantic Marine in Jacksonville, FL, it is a sister ship to Victory I, built as Cape May Light, and both somewhat checkered histories, but seem now to have found profitable work for Victory Cruise Lines. They can carry 202 passengers.

Also arriving this morning the US flag research vessel Hugh R. Sharp tied up at pier 26. The ship was built in 2005 by Dakota Creek Industries in Anacortes, WA for the University of Delaware. It can accommodate 12 scientists in addition to its crew of 8. 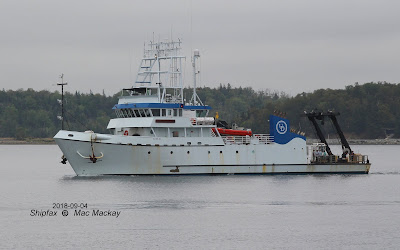