Atlantic Container Line is still having trouble with its new China built ConRos. The latest to encounter a problem is Atlantic Sea, the third in the series of five, and completed in 2016 by Hudong-Zhenghua in Shanghai.

Despite being sponsored by Princess Anne in Liverpool the ship has been troubled with mechanical issues. On Christmas Eve 2016 it was held overnight in Bedford Basin and its March 26, 2017 sailing from Halifax was delayed. It also lost an anchor sometime in 2016. The only good luckk it has had was on October 5, 2017. Despite being in an unscheduled drydocking at Blohm + Voss in Hamburg, it was not struck by a shipyard crane that toppled over in high winds and narrowly missed the ship. 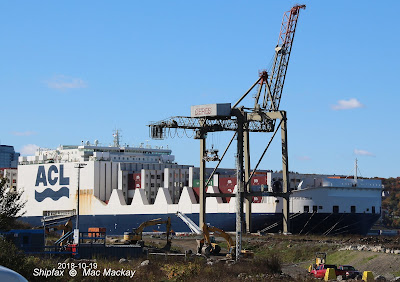 Atlantic Sea peaks out from the east berth at Fairview Cove, idled by some unidentified problem.

The latest misfortune has held the ship in port in Halifax since Monday, with no departure time scheduled yet. Losing that many days on the tightly run transatlantic schedule must be resulting in a lot of hair loss for someone.

Probably unrelated, but ACL has announced that it will concentrate its office functions in Virginia Beach and close its Halifax office, with a  loss of 15 jobs. Cost cutting is all the rage these days in the shipping world, where competition is intense. ACL is now a part of the Grimaldi Group, but began calling Halifax in 1969. Then it was the joint venture of several prominent shipping companies - some of which are now only memories: Wallenius Lines, Swedish American Line, Rederi AB Transatlantic and Holland America (in 1965) joined by Cunard and Cie Generale Transatlantique in 1967.