ZIM Integrated Shipping Services Ltd has re-jigged their ZCA Mediterranean - North America weekly service with some different ships and different ports. Effective September 1 such familiar ships as ZIM Alabama and ZIM Texas were removed from the rotation and transferred to other ZIM routes. 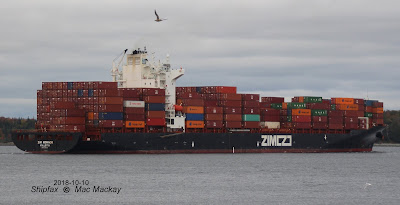 Two "new to Halifax" ships have joined the rotation, ZIM Yokohama made its first call September 26 and ZIM Shekou will bypass several ports and will not call in Halifax on the regular day of October 17.
Both ships were built by Dalian New Shipbuilding in Dalian, China in 2007 and are 41,482 grt, 52,000 dwt with a capacity of 4250 TEU.

In December this ZCA service will include THE Alliance's AL7 services, which until now has been run separately. The new port rotation will be Mersin, Ashdod, Haifa, Izmr/Aliaga, Piraeus, (Livorno will be dropped), Barcelona, Valencia, Algciras (added), Halifax, New York, Norfolk, Savannah, Valencia, Tarragona, Mersin.