The windy weather continues, but abated sufficiently that the tanker FMT Knidos was able to arrive in port safely this afternoon. High seas accompanied the winds and made it unsafe to board pilots, particularly with low freeboard ships with decks nearly awash. FMT Knidos was originally due October 24, but remained at sea until this afternoon. 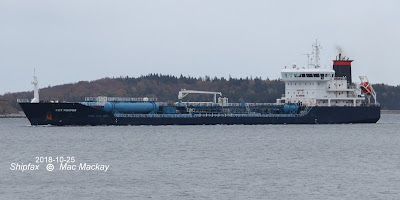 Fully loaded the ship's main deck is very close to the water.
The ship was here as recently as July 14 [see details in that post]. On that trip it was carrying caustic soda from Freeport, Bahamas to Port Alfred, QC. On this trip it is arriving from Houston. It will remain in port to take bunkers.


Another ship with a delay is Victory I. It was arrived late afternoon Tuesday a day early, and was due to sail yesterday, but remained in port over night. It is now due to sail at midnight tonight.. 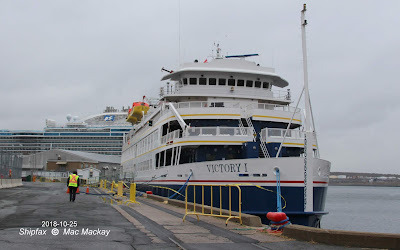 Regal Princess in the background is apparently not effected by weather. However the yellow caution tape tells the tale about the wind.

Victory I has completed its summer season sailing on the Great Lakes and St.Lawrence and is headed south for the winter. Operators Victory Cruise Lines have announced that they will not charge a "singles supplement" starting next year. Having learned that many of their clients are single, they will now (effectively) base their fares on a per person basis.