The port was unusually busy for a short spell this morning with arrivals and a departures - some before sunup such as the container ship APL Santiago and the cruise ships Adventure of the Seas and Viking Star.

After sunrise there was a departure that had been anticipated for several days, but in view of Hurricane Michael's proximity, they were likely wise to stay in port. USS Hué City CG-66 arrived October 4 from exercises  off Nova Scotia. It is a Ticonderoga class guided missile cruiser based in Mayport, FL. Several Canadian naval vessels returned to port at about the same time, including the submarine HMCS Windsor. 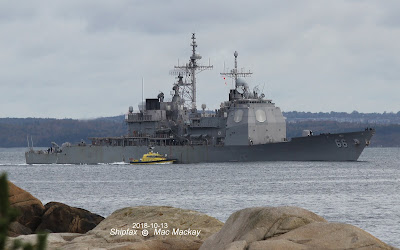 The pilot boat is alongside to disembark the pilot off Portuguese Cove.

While alongside navy Jetty Charlie, one of the ship's helicopters was rolled out for work. The ship can carry two of the Sikorsky Seahawks adapted for naval use with a folding tail. Hué City was commissioned in 1991. 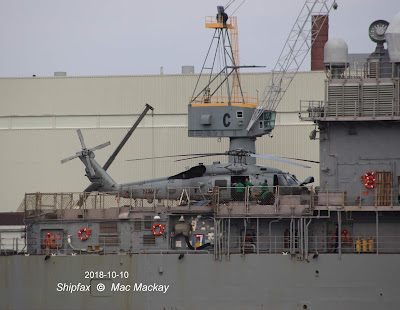 As Hué City was disembarking its pilot, the container ship Alexandra was inbound for THE Alliance's EC5 service. 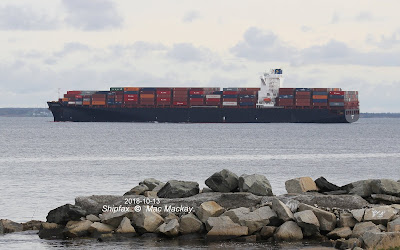 The pilot is already aboard as Alexandra passes Portuguese Cove. 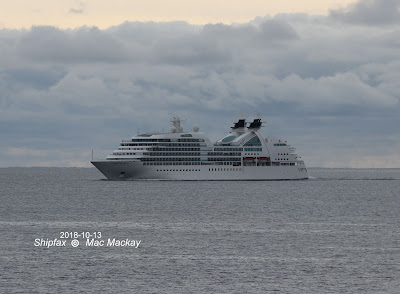 It was a mid-morning arrival for Seabourn Quest. The ship left Bar Harbour late last evening and was able to maintain a pretty steady 15 to 16 knots on the trip. Sea conditions were still a bit boisterous over night as the remains of the hurricane passed to the south of us.  Built in 2011 by T. Marrioti in Genoa it is a yacht-like vessel of 32,348 grt and a passenger capacity of 450. In September it had an air lock in its cooling system, resulting in an overheated port engine. It had to anchor in the St.Lawrence River for time until the problem could be rectified. 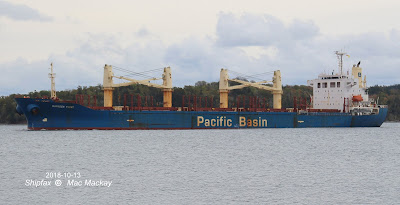 Another arrival is worthy of note. The bulk carrier Marsden Point arrived from Churchill, MB. Now that the federal government has agreed to buy and spend $117 mn to repair the Hudson Bay Railway and the port operation, a cargo of wheat has been released after three years in limbo. The wheat, belonging to the Providence Grain Group of Fort Saskatchewan, AB, arrived in Churchill by rail in 2015. When the port operators shut down the operation in 2016 the wheat was stranded. During that time a certain amount of it had deteriorated, and the remainder was likely to be spoiled if it was not shipped out by the end of this year.

Since no Canadian ship was available, Providence hired Marsden Point to carry the grain to a southern Canadian port. A foreign sale was not possible as the condition of the grain could not be determined fully until it was unloaded. According to Providence's Coasting Trade Licence application for Marsden Point, the plan was to ship the grain to Port Cartier, Baie Comeau, Sorel, Quebec City or Montreal. My opinion is that those elevators were fully booked, and since Halifax has a huge elevator that is well below capacity the grain may be off loaded here. The Halifax elevator is also not owned or operated by one of the large grain buyers and is thus not a competitor of Providence.

Update: The grain must have been of acceptable quality to be sold abroad. When the ship sailed on Sunday afternoon, its destination was given as Vercruz, Mexico.  In Providence's coasting license applicaiton they stated that a sale to Mexico had fallen through.

Marsden Point is a 21,185 grt, 35,107 dwt bulker, built in 2002 by Shin Kurushima, Onishi, Japan as Green Hope. In 2014 it acquired its current name and is operated by Pacific Basin Shipping Hong Kong Ltd.The ship carries four 30 tonne cranes and grabs.


The load was delivered September 30, 2007 by the now notorious Kathryn Spirit. That is the ship that was finally broken up this year at taxpayer expense (estimated at $11.5 mn) in Beauharnois, QC. Permission to scrap the ship in that location was denied in 2011 and when a sale to Mexico fell through the ship became a threat to sink. The government paid a huge sum to stabilize the ship then hired the original scrapper to break it up anyway. 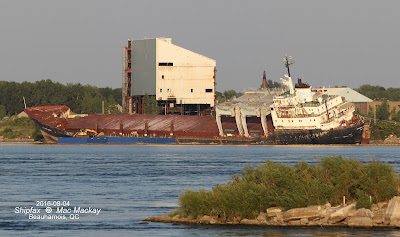 Kathryn Spirit as it appeared in 2016 with Groupe Océan's blue stabilizing barge alongside.
Demolition was completed in September of this year.