The only cruise ship arrival today is Hamburg, a ship that has called here off and on since new in 1997. It was built by MTW Wismar for operation by HAPAG-Lloyd as c. Columbus. The small letter "c" was intentional and apparently denoted Christopher. With a modest tonnage of 14,903 as built, and dimensions of 472 ft x 72 ft, it is small enough to cruise the Great Lakes and has several features to accommodate that service, including retractable bridge wings. 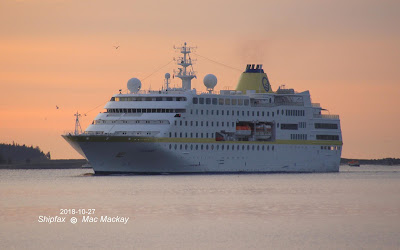 Its last Great Lakes touring season was 2011 after which HAPAG upgraded its fleet. In 2012 Plantours took over operation and gave the ship its present name. At some point its cutaway stern was filled in and tonnage increased to 15,067, but passenger capacity remained at 394 to 420 (in 197 cabins, five of which are for families) with 170 crew. For some reason the ship is referred to as "MS Hamburg" but "MS" forms no part of the ship's name. 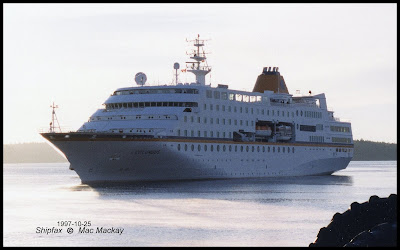 At almost the same time of day and time of year c.Columbus arrives in Halifax for the first time twenty-one years ago. Note the cut away stern, since filled in.


Starting in Greenland early in September, the ship has toured along the Labrador coast, Gulf of St.Lawrence and Saguenay to Montreal. It then made two trips inland as far as Milwaukee and Chicago. It is now headed for Bermuda, the Bahamas and Cuba. The ship sailed early this afternoon, no doubt to get ahead of some nasty weather that is due over night.

Hanseatic's squared off stern and small duck tail is not very attractive, but improves the ship's behaviour at sea. 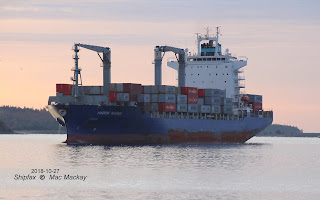 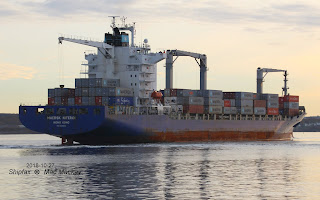 Built in  2009 by Hyundai Heavy Industries, Ulsan, it has a capacity of 2592 TEU (including 600 reefers) with tonnages of 26,836 grt, 33, 412 dwt. It is one of several short term replacements for the "P" class ships as they are drydocked and refitted. Although the ship carries a Maersk name it only carries Maersk funnel colours. It is a long term charter, one of six similar "N" class ships owned by Fair Hope Ltd, sailing with Hong Kong flag and managed by Anglo-Eastern Ship Management.

The Maersk CMA / CGM Columbus JAX service brought in APL Vancouver this afternoon. The 109,712 grt, 115,060 dwt ship, built by Daewoo SB + ME, Okpo in 2013 began calling here in June of this year but this time it arrived in broad daylight. It may sail in broad daylight too, since high winds tonight may prevent working the ship.

Stern tug Atlantic Bear begins to work the ship's stern around while bow tug Atlantic Fir is set to push as the ship approaches pier 42 Halterm.

APL Vancouver is one of seven 9200 TEU APL sister ships on the 17 ship Columbus JAX service, with a variety of CMA CGM ships of roughly the same size. At this point only one of the ships exceeds the "magic" 10,000 TEU mark. They run from Oakland and LALB, cross Pacific, various Asian ports, then direct from Colombo to Halifax via the Suez Canal. After calling at major east coast ports it returns back across the Atlantic direct to Port Kalang and eventually on to the US west coast. The 17 ships call at 17 ports on a 119 day rotation.

This morning's early arrival, Wisteria Ace also sailed in daylight after a stop at Autoport.

This post does not cover the congestion at Fairview Cove that saw two ships berthed (Berlin Bridge and Alexandra with Dalian Express anchored most of the day waiting a berth.)