A well remembered name has been re-used by the Royal Navy in their newest fleet replenishment oiler. Operated as a Royal Fleet Auxiliary, the second RFA Tidespring A136 has only recently entered service. Although ordered in February 2012, it was only delivered in March 2017 - 18 months late - by Daewoo Shipbuilding + Marine Engineering Co, Okpo, South Korea. It was then outfitted by A+P Falmouth and finally entered service in November 2017, but only performed its first actual mission in April of this year. 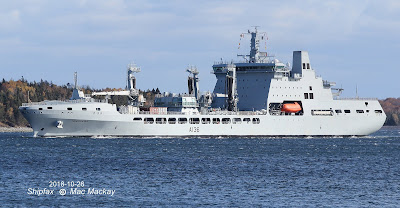 The ship measures 29,324 grt, 21,750 dwt and like similar ships, can fill a variety of roles including refueling at sea, and as a base ships for marines. It can house one Merlin / Wildcat helicopter but has a deck that can accommodate large helos such as Chinooks. In addition to Phalanx armaments, it has a published speed of 27 knots. (This is very fast for a supplier!)

At least superficially it resembles the Canadian Navy's newest ship Asterix, but similarities are deceiving. At least the RCN's ship was delivered more quickly. Asterix, built on a former container ship hull, now measures 23,136 grt, so is somewhat smaller but serves a comparable function. It could carry Phalanx weaponry (but doesn't) and may be able to carry two Cyclone helicopters and house Chinooks. However it is intended as an interim vessel, privately owned and leased to the RCN.

The first RFA Tidespring  A75, based on a World War II design shared with Australia and New Zealand, was a turbine steamer, built very quickly by Hawthorn Leslie. (It was laid down in July 1961, launched in May 1962 and commissioned in January 1963). Basically a fleet oiler, it was able to carry three helicopters, and although scheduled to decommission in 1982 it continued in service during the Falklands war in the same year and carried marines, participated in the capture of South Georgia, and was used to house prisoners. Continued supply requirements during the subsequent re-occupation meant that the ship lasted until December 1991. It was then towed to India for scrap in 1992.