Melfi Marine, a company that trades between Europe, Halifax and Cuba, has chartered many ships for short, medium and long terms over the years. Each time a new one comes along it seems to be bigger than the last and so it is with Julius-S. which arrived today on its second trip. (I missed the first on August 27.) 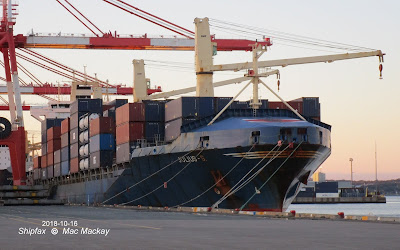 Julius-S. at pier 42 using one shoreside crane to finish off loading.

The ship began life as CMA CGM Brasilia for Navigare Gmbh+Co but was immediately acquired by Schlepers and renamed Julius S. That name was reconfigured with the addition of a hyphen in 2010. It was reflagged from Germany in 2014.

Prior to its stint with Melfi it worked for Maersk's WAF1 running from Tanger and Algeciras to the West African ports of Pointe Noire, Libreville, Cotonou, Takoradi and Nouakchott.