The cruise ship Insignia arrived this morning off Halifax from Saint John, NB, and after standing on and off for many hours was still not able to board a pilot safely by mid afternoon. The ship was determined to call in Halifax eventually so it steamed back and forth well offshore, until 1930 when the pilot was finally able to embark. The ship will take bunkers then head back to sea. 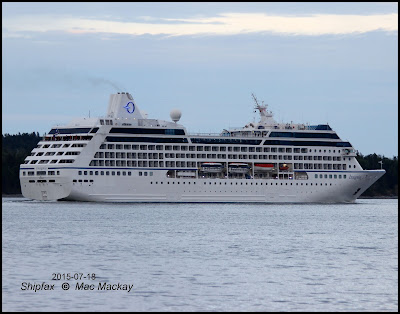 Insignia as it appeared in 2015. The ship is due for one more call in Halifax on November 6.

ACL's scheduled arrival Atlantic Sky is also standing by offshore waiting for conditions to improve, along with the supply vessel Horizon Star. Another container ship, Maersk Patras, which would normally have called on Saturday is now due tomorrow.

At Halterm APL Vancouver [see yesterday's post] was able to start working cargo this morning when the winds died off, but its scheduled departure time of 1630hrs has been put off.

Dalian Express at Fairview Cove was also finally able to get away for 2100. Its original departure time was 0400 hrs, but that was delayed by a combination of high winds at the terminal that delayed unloading, and conditions at the pilot station that would not permit pilot disembarkation.

Autumn is the usual windy season here, but it seems that this year has been windier than usual, resulting in numerous delays and some skipped calls from cruise ships.