Ship watchers had another rare treat in Halifax today as the container ship YM Enlightenment entered the harbour and sailed up west of George's Island heading for Bedford Basin. The reason for going west instead of east of the island was that the bulk carrier Marsden Point was leaving port at the same time and YM Enlightenement's pilot decided to give the outbound ship a wide berth. [See yesterday's post for info on the Marsden Point with an update made today.]

The water is actually deeper east of George's Islands, but it is narrower there, especially when there are cruise ships tied up at pier 20 (Norwegian Dawn) and 21 (Norwegian Gem).

It took an 18mm wide angle equivalent lens to get the whole ship in.

The tug Atlantic Oak was the tethered escort with a line up to the ship's stern, and Atlantic Willow came along to accompany the ship through the Narrows. 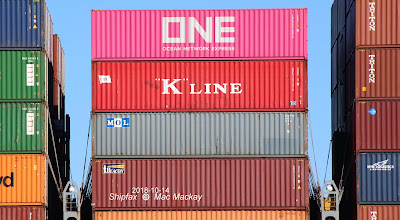 Repainting and perhaps even renaming the ships will be a much longer process as MOL, K-Line and NYK  blend their container operations. Old containers will likely not be repainted and so will be around for many years to come.