CCGS Matthew while still in service.

The former Canadian Coast Guard survey vessel Matthew (now simply called 2015-03) may finally have found a buyer. The ship has been up for bids at least 6 times starting at a minimum of $1.9 mn in September 2016. That was reduced to $1.75mn then to $1mn in October 2017 and no sale was concluded. The latest tender call, which closed October 24, also wanted a $1mn minimum, but did state that if no bid was received above that amount, a lesser amount would be considered.
Apparently bidders weren't fooled by the minimum and a sale for $279,000 is now in progress. 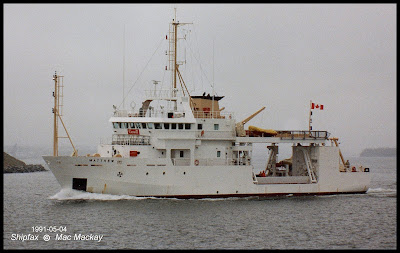 The ship was built in 1990 by Versatile Pacific Shipyard Inc, North Vancoiuver, BC for seasonal hydrographic work, particularly in near coastal and shallow waters. After a short work up in PatBay it was transferred to BIO in May 1991. Despite an extensive, and costly refit in 2010 and a smaller one in 2011, budget cuts and policy changes resulted in it being retired at the end of  the 2011 season. If the ship had been sold then it might have fetched something like the original asking price. It certainly would have got more than the paltry price it has received now - and the ship would have been in better condition. Having now sat idle for more than six years it is a sorry sight. 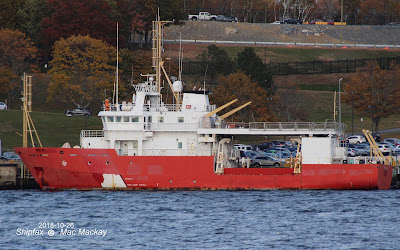 One really has to question government disposal methods when a public asset is allowed to lose it residual value. Of course once it was surplus it came off the Department of Fisheries and Oceans' books and they no longer cared. However it took from 2011 to 2015 to actually decide to decommission it. I suppose whatever department is responsible for Government of Canada Surplus doesn't carry it as an asset of the people of Canada either. So no hurry - no stewardship.

So what would I have done you might ask? I would have found a way to re-purpose it (all that deck space which was used for survey launches could be used for passenger accommodation) it woould have made a great expedition yacht (but not for the arctic - it isn't really ice stengthened)  or found a nation that could benefit from it and give it away. We would certainly have been doing some good with it in the latter case.