More high winds and periods of rain are nothing new in recent forecasts, and typical for this time of year. The harbour was a little lumpy this morning as the pilot boat Scotia Pilot returned from the station off Chebucto Head. It had just embarked a pilot for the APL Houston and was returning to base for another pilot. 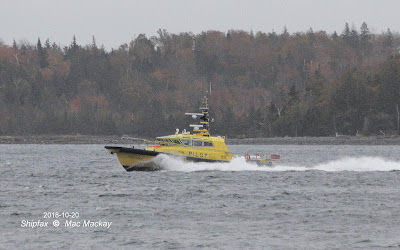 Before the rain started in earnest APL Houston arrived on the CMA / CGM JAX service. The 109,712 grt, 108,000 dwt ship, built in 2014 by Daewoo Shipbuilding and Marine Engineering Co Ltd in  Okpo  has a container capacity of 9500 TEU. Although not over the 10,000 TEU capacity that the port seeks to have established as the threshold for large ships, this one is big enough. Its very high sides and towering deck load make it very much subject to windage and requires careful handling.

The tug Atlantic Fir squares up at the bow and the Atlantic Bear on the stern are both braking and  starting to turn the ship. The busy pilot boat, with lots of wind driven spray, heads out to meeet the next ship.

It required three tugs to come alongside at Halterm, including Atlantic Bear, the largest of the tugs based in Halifax.


Amongst the other arrivals and departures today there are a couple of in harbour moves. One is a bit unusual. The tanker Ardmore Encounter will be moving from Irving Oil to Imperial Oil.

Ardmore Encounter has discharged a partial load at Irving Oil.

It is rare to see a ship with a split load, but again this may be due to Irving Oil's troubles after a fire at its refinery. Built in 2014 by STX Offshore + Shipbuilding in Jinhae, the ship was originally named Front Clyde for Frontline Tankers. Current owners, a single ship company, acquired the ship in 2016 and renamed it in line with the fleet operated by Anglo Ardmore Ship Management. A Medium Range 2 handysize tanker of 29,993 grt, 49,478 dwt, its last port of call was Beaumont, TX.

Waiting at anchor, Irving Oil's tanker East Coast will move alongside immediately after the Woodside berth is clear. A Mid Range 1 tanker of 23,356 grt, 37,515 dwt, it was built by Hyundai Mipo Dockyard in Ulsan as Nor'Easter for long term charter to Irving Oil under the Marshall Islands flag. In 2014 it was brought under Canadian flag and renamed. Owners, associated with Vroon / Iver Ships of the Netherlands assigned other ships to the Irving work between Saint John and US east coast ports, but without renaming them or giving them Irving Oil colours.
As with the three other ships in the Irving fleet, it was fitted with an exhaust gas scrubber system in 2015.