Flags of many nations - part 1

On any given day the flags of many nations can be seen in Halifax harbour. Usually many of those are so called flags of convenience. Ship owners may register their ships in those nations even if they are not residents, and may have taxation or regulatory regimes that are more favourable than their countries of origin.

Today however there were three flags in evidence, and a fourth was implied, as I caught a glimpse of part of the harbour. 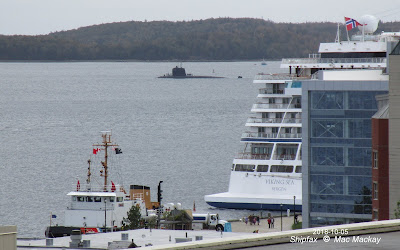 In the foreground the USCG Katmai Bay was taking on fuel at the Tall Ship's quay, and of course was flying the flag of the United States (just above the fuel truck) and that of Canada as a courtesy.  It was also displaying a red flag indicating flammable material was being handled.

Adjacent at pier 20 the Viking Sea was flying the flag of Norway, and displaying its home port of Bergen on the stern. (Norway has an offshore register of its own, which allows shipowners to engage non-Norwegian crew and provides other incentives.)

The prime reason for my glimpse was the arrival of a French navy submarine, which was just rounding Ives Knoll buoy on its way to Shearwater. It did not appear to flying a flag of any sort, but that is not unusual as subs have very limited "mast space" for flags. The sub is one of six in the Rubis class of nuclear attack submarines in the French navy.

Nuclear submarines are usually kept fairly far away from prying eyes, and from centres of population, so they tie up at Shearwater. This is the first French sub to visit Halifax in my recollection.