Typically tankers of this type are employed in long voyages, since the cost of carrying cargo is less per tonne using larger ships. They are fitted to carry petroleum products and the tanks are epoxy coated to permit easy cleaning between cargoes. They carry petroleum products, as opposed to crude oil. Unlike chemical tankers, that can carry many different types of cargo, this ship can carry a maximum of three different cargoes. Although there is nothing visible from a distance, it is fitted with devices to enable it to load over the bow at offshore, single point moorings.

According to AIS today's arrival is coming from Fujairah, UAE and headed for the St.Lawrence River - certainly a fairly long trip. 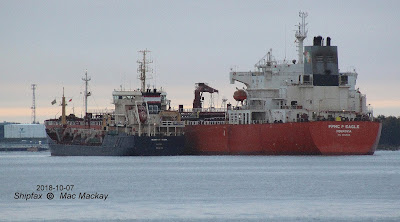 At anchorage number one at sunrise with Algoma Dartmouth alongside.


The ship carries an unusual name, FPMC P Eagle. The unique naming system is that of the Formosa Plastics Maritime Corp, a division of the Formosa Plastics Corp, hence "FPMC". It has a large fleet of tankers and some bulk carriers. Their MR product carriers are numbered (e.g. FPMC 25, which was here in  2015.) The LR tankers have the letter "P" - designating "Product", inserted after the FPMC.

Bunkering completed, the ship begins to weigh anchor in a light drizzle.

FPMC was established to carry the company's own cargoes when they found discriminatory rates applied due to Taiwan's isolation by some countries. Now well established with 37 ships and six more MRs on order, they also participate in charter work for other shippers.


FPMC P Eagle was built in  2009 by STX Shipbuilding Co in Jinhae, South Korea, and measures 42,340 grt, 74,863 dwt. Despite Taiwan ownership, the ship is flagged in Liberia and has multi-national officers and crew managed from Singapore. The ship is on a time charter to Hafnia Tankers of Denmark and operates in their LR1 Pool of about 60 ships, called Straits Tankers, run from Singapore.