Saga Sapphire ex Europa - good from any angle - and a bonus

As Saga Sapphire sailed early this afternoon [see also yesterday's post], it backed out into the stream from pier 23 and turned off the pier. It was a chance to see the ship from several different angles, and remark that it always looks good. 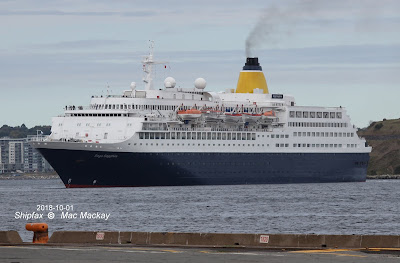 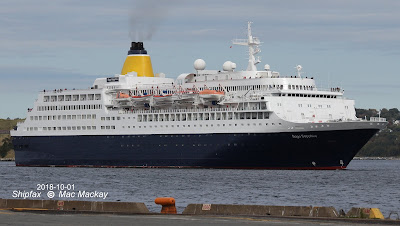 The ship's stern configuration has been modified - I believe during the 2011-2012 refit at Fincantieri - by building out "blisters" that are not really all that noticeable. Stern blisters improve the ship's stability, usually at the expense of appearance. 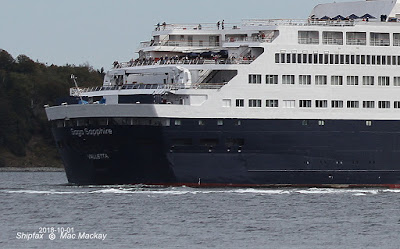 The stern blister appears to have been banged up a few times. 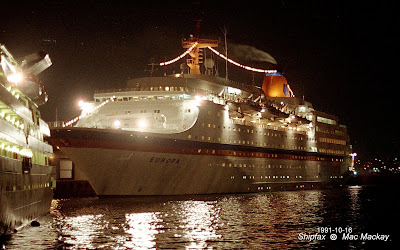 Although it does not show well in this night shot, as built Europa had a more rounded cutaway stern.

(Europa often stayed in port over night, as did Saga Sapphire.) 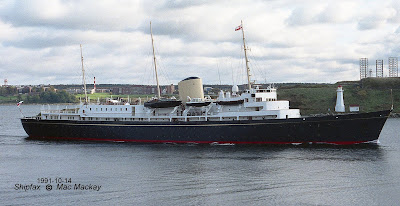 Another ship that looked good from any angle was HMY Britannia. By coincidence it was in Halifax shortly before the night shot of the Europa, and with the negative only two frames away, I had to scan it too.

Laid down by John Brown  Co in 1952, launched in 1953 and commissioned in 1954 it served HM The Queen and family until it was finally decommissioned in 1997. It has been preserved in Leith, Scotland and is one of Edinburgh's most popular attractions. No wonder.