While cruise ships (the big white ships) are still calling in Halifax there is still demand for harbour tour boats (little white boats). There are still two weeks left in the cruise season  - the last ship is scheduled for  November 6 - and so the tour boats carry on despite chilly temperatures.
Today there were three cruise ships in port, Norwegian Dawn, the giant Anthem of the Seas and the more modestly sized Seven Seas Navigator. (The Victory I is due late this afternoon). 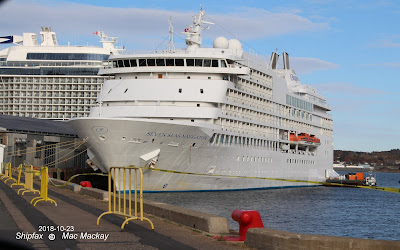 Seven Seas Navigator at pier 23 with Anthem of the Seas looming at pier 22.
That's the tug Gulf Spray with a scow alongside removing refuse and blocking the view of the ship's stern sponson.


The Seven Seas Navigator ship started life in the Soviet Admiralty Shipyard in St.Petersburg as a naval support ship for satellite tracking, launched in 1991 as Akademik Nikolay Pilyugin. However it was bought "on the stocks" so to speak by Radisson Cruises and towed around to T.Marrioti SpA in Genoa and completed in 1999 as a cruise ship. It initially had 250 cabins and could carry 542 passengers but this was reduced to 490, but with a crew of 340 giving a very high degree of service for those travellers.
The 28,550 grt ship is strengthened for navigation in ice, but has had vibration issues. Its stern, including props and rudders, was re-built by Blohm+Voss in Hamburg in 2010 but that does not seem to have had much effect, and the ship is noted as "lively" at sea.
Radisson Seven Seas Cruises re-branded itself Regent Seven Seas Cruises in 2006 and in 2016 reportedly spent $40mn on a two month long refurbishment to bring it in line with Regent's décor standards.

Among the little white boats, at least two were busy today, Kawartha Spirit went out on a nature cruise beyond Chebucto Head - perhaps looking for whales or maybe even white sharks. Built in 1964 by Hike Metal Products in Wheatley, ON, the boat worked as Miss Muskoka then Kawartha Spirit until 2016 when it was acquired by Murphy Sailing Tours Ltd of Halifax. There has been talk of a name change, with  more local content,  but nothing has happened yet.

Summer Bay was on its way to McNab's Island to pick up hikers as the tow passed my vantage point. It was built as Gaffer IV by Gatheralls Boat Tours Ltd in Bay Bulls, NL. A twin screw vessel with RFP hull, it initially showed up in Nova Scotia working out of Lunenburg as Summer Bay, but came to Halifax in 2004.

Murhys also operate the faux stern wheeler Harbour Queen I (which is also white) and the three masted schooner Silva which is not - it's black.