Silver Wind - lives up to its name - supplemented

The cruise ship Silver Wind brought high winds to Halifax today. In fact the wind picked up last night, hastening the arrival of the Serenade of the Seas which came in around mid-night and tied up immediately to avoid conditions out at sea. Silver Wind arrived at its scheduled time but used two tugs to get alongside pier 23. 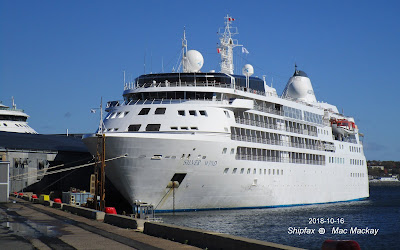 Silver Wind at pier 23, with the Serenade of the Seas at pier 22 in the background.
Connors Diving's work boat and drill barge in the foreground are not working due to the wind. *
Note Silver Wind even used its anchor to slow its speed as it came in, even though it had two tugs.

The ship was built back in 1993 and has the streamlined Italian look of the time. Builders were Visentini, Porto Viro, a yard that normally builds ferries and smaller ships. Silver Wind has been cited as one of the most luxurious ships afloat. Its 294 (or 296) passengers are hosted by 222 crew. Current grt is listed as 17,400, up from 16,927 when built.

All has not been smooth sailing for the ship recently. In March 2018 it initially failed a rigorous US Public Health inspection, but was cleared after it was sanitized and Silver Seas cruises promised to re-educate crew on sanitary practices.

On October 12 of this year the ship had an escort tug when it sailed from Montreal to Quebec City. There were concerns about the reliability of its steering and the Océan Arctique followed close behind the ship for most of the way.

Although the ship underwent a major refurb in December 2016, it seems to have been largely cosmetic. There were also complaints a few years ago about the anchor slamming in high seas. The noise in some cabins, including crew quarters, was very loud and disconcerting to many passengers.

I am not sure if this may not be the ship's first call in Halifax. I do not recall seeing it before, but it is not listed as one of the inaugural calls on the Cruise Halifax website. Fleet mate Silver Whisper has been here many times since it was built in 2000, but its sister ship Silver Shadow has not.

High winds and steep seas may have been the reason for two cruise ship cancellations in the past week. Pearl Mist skipped its call September 13 and Victory II skipped October 10. Both are small ships and likely sought shelter for the comfort of passengers.


* Connors work boat and the drill scow had a bit of a rough ride at times late yesterday afternoon when they returned from a coring operation in Dartmouth. 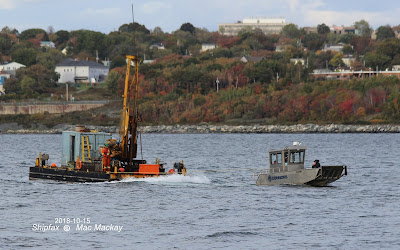 Supplement:
This afternoon when it was time to sail, the wind had died down almost completely, but the ship called for two tugs. They assisted the ship to back out from pier 23. 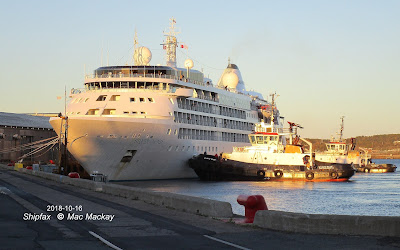 Once out in the stream the tugs let go and the ship appeared to turn on its own without difficulty. It set out smartly for sea and looked handsome despite the dying sun.