With ships arriving and leaving at the same time - normally at the end of the day shift for port workers - traffic can get janmed up a bit. Fortunately, there are two channels that ships can use to avoid close quarters meets.

Three ships - two  outbound in the western or deep water channel and one inbound in the main channel.

Today was a very minor jam, with one inbound and two outbound.


Outbound in the lead was the impressive Crystal Symphony. Now considered a classic - not only because it has no unsightly hull graphics - but also because of its graceful proportions and swooping bow. Remarkably unchanged in appearance since it was built by Kvaerner Masa, Turku in 1995, the 51,044 grt ship has a passenger capacity of 922. It has undergone three extensive refits, one in 2006, one in 2009 and another in 2012. During its long career it has cruised in many parts of the world, but only in this area in 2012 and 2013. 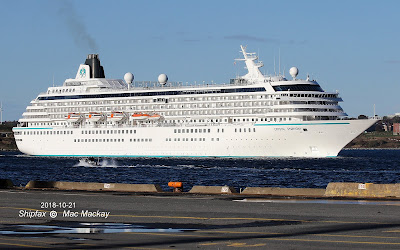 The second departure was Hoegh Bangkok built in 2007 by Uljanik, Pula, an autocarrier of 55,775 grt, 16,632 dwt, with a 6500 CEU capacity. It fell in behind Crstal Symphony and took the western channel.

The one inbound ship was Thermopylae operating for Wallenius Wilhelmsen, but owned by Wilhelmsen. Its company theme name, beginning with the letter "T" recognizes the Greek site of the 450 BC battle between Leonidas of Sparta (loser) and Xerxes (winner). The name means "Hot Gates" and it certainly was a hot time for the defenders in one of the most famous "last stands" of all time.  For ship lovers however the name is associated with the famous China tea clipper Thermopylae, built in Aberdeen, Scotland in 1868 and setting a never since broken outbound time to Melbourne and defeating the Cutty Sark in a homebound race from Shanghai. 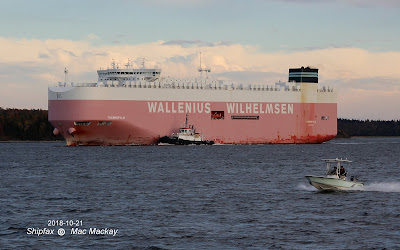 Wilhelmsen ships' nmaes begin with "T" and thier hulls are apainted a red-orange colour. However someone needs to change the formula since this one was has faded dramatically in only three years.

This Thermopylae was built in 2015 by Hyundai Samho and measures 75,283 grt, 75,283 dwt with a capacity of 8,000 autos. A post-Panamax ship, it is a member of the HERO (High Efficiency RoRo) class, with significant capacity break bulk and non auto cargoes. 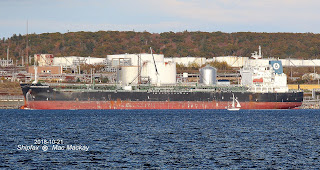 In the background the tanker Ardmore Encounter now at Imperial Oil (see yesterday's post) was continuing to unload and is now high out of the water.