The legendary Canadian Survey Ship Acadia put to sea today in tow for Shelburne, NS. This is the first time the ship has left the confines of Halifax Harbour since it became the centrepiece of the Maritime Museum of the Atlantic in 1982. 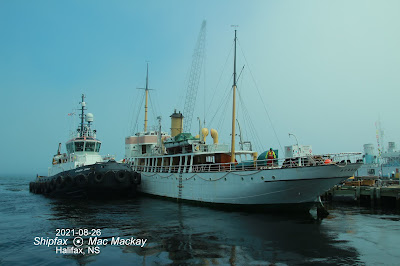 The tug Atlantic Larch backs Acadia out of her berth at the Maritime Museum of the Atlantic, as fog rolls in from the sea. That is Canada's naval memorial, the corvette Sackville in the background. Where else can you take a picture of two World War II veterans?
There are no available drydocking facilities available in Halifax to carry out the needed "shave and haircut" to the ship's hull and quite probably some repairs before a new anti-fouling coating can be applied to the underwater parts of the hull.
Built in 1913 by Swan Hunter, Newcastle on Tyne, the ship was a hydrographic and oceanographic survey vessel before it was retired in 1969. It was commissioned into the Royal Canadian Navy in World Wars I and II and conducted important survey work in Hudson Bay and elsewhere in Atlantic Canada. A more detailed history can be found in the Wikipedia entry: CSS Acadia 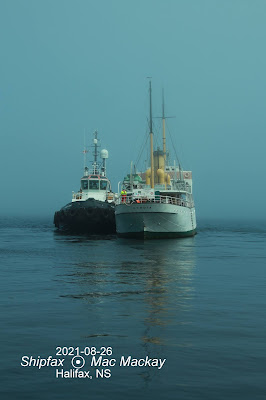