West coast North America port congestion has disrupted many shipping line schedules, including THE Alliance's AL5 service from North Europe via Halifax. Today's arrival NYK Romulus is east bound having skipped some calls in an effort to keep the ship, and its cargo, moving. 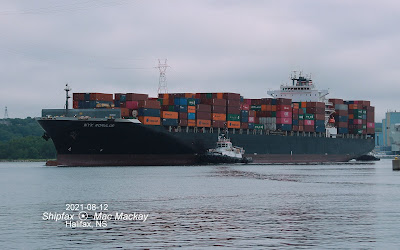 The ship was here last, westbound, May 29 and after calls in the Caribbean proceeded through the Panama Canal, missed its scheduled calls in Los Angeles and Oakland in early June, but was able to dock in Los Angeles June 19. After calling in Vancouver June 22 it called in Seattle June 28, and Oakland July 15, and skipped Los Angeles again.
After sailing from Halifax it will cross the Atlantic but will skip its Rotterdam call and is scheduled to go direct to Southampton. It is due back in Halifax on its next voyage  August 31.
The ship was built in 2009 by Hyundai, Samho. Measuring 55,487 gt, 65,883 dwt it has a capacity of 4922 TEU including 330 reefers. [All tonnage numbers have changed since the ship was delivered. Gross tonnage is a calculation - not a measurement - so when deadweight tonnage is adjusted, based on actual measurement, gross changes too.]
.
Posted by Mac at 5:35 PM