CMA CGM's Columbus JAX schedule has been "bunched up" with two ships arriving in quick succession rather than the usual week apart. Sailing yesterday was the CMA CGM Jules Verne after an overnight port call. 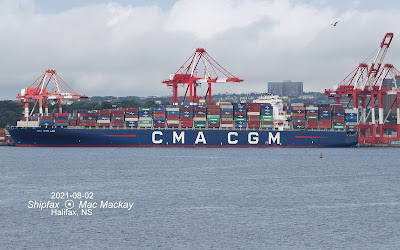 Built by Hyundai Ulsan in 2010, it is a 131,322 gt, 131,236 dwt ship with a capacity of 11,200 TEU. Of note is the fact that all superstructure is together. Most ships of its size have an island bridge structure well forward.
The previous ship CMA Jules Verne had had a slower passage between Colombo (July 9) and Suez (July 18-19) while CMA CGM Leo sailed from Colombo July 13 but reached Suez July 21-22. Most schedule delays these days are blamed on port congestion or labour availability issues, but this situation appears to be more a matter of ship's speed with Leo catching up more on each leg.
The Columbus JAX service operates with COSCO, OOCL and Evergreen under the Ocean Alliance banner. Currently the service uses nineteen ships, all provided by CMA CGM or subsidiary APL. The rotation is thus about four months for each ship. The ships call at seventeen individual ports between east coast North America and west coast North America via Suez / Far East with no European ports of call.
.