It was a return appearance today for one of CMA CGM's "ultras". One of the nineteen ships in the Columbus JAX rotation it was once in the cohort of largest ships to call in Halifax. That was as recently as 2019 when cracking the 10,000 TEU mark was the record to strive for. Now the 17,000 TEU mark is the number to beat. 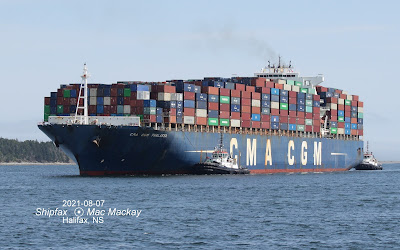 In comparing photos from 2019 with today's arrival, the ship appears to have loaded one more (an eighth) tier of boxes, compared to the seven tiers in 2019. Business is certainly booming as are charter rates for ships. Ships of this size are routinely being chartered for well in excess of $100,000 per day as compared to the $47,200 quoted in the 2019 post.