Another one of MSC's St.Lawrence service ships arrived today to top up its load from St.Lawrence River draft to ocean draft. 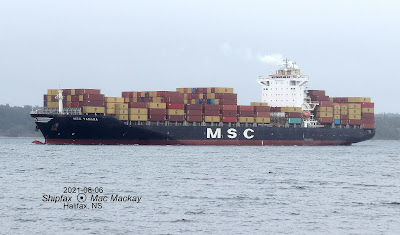 MSC Tamara emerged out of the fog with a plume of water vapour from its exhaust gas scrubber. (Thanks to photo editing, the photo is a lot clearer than what I saw at the time.)

I saw the ship outbound in Quebec City in 2018 and note that its deck load was much less, but even so it was drawing less water. It may be carrying more empties on this trip. Because of the world wide shortage of containers, there is a huge demand for empties in the far east. 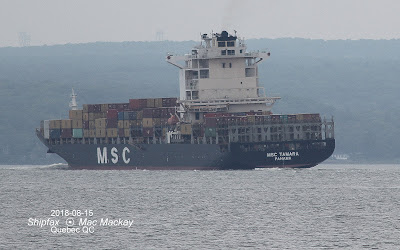 Calling in Halifax to offload some boxes on its inbound voyage or top up with more cargo outbound allows the ship to operate more efficiently on the ocean leg of the trip.
.