APL Dublin arrived in Halifax again today on the Columbus JAX service. This is the first time that it has arrived or sailed in full daylight, and so I was finally able to get a clear photo. 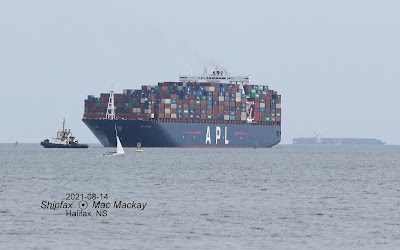 APL Dublin passed the ZIM Yokohama, which has been anchored off Halifax since August 6.
It was not so long ago that ships with a capacity in excess of 10,000 TEU were a novelty in Halifax, but they are commonplace now. The only noticeable extra attention paid to them is the provision of a tethered escort tug at the stern. In today's case it was Atlantic Beaver taking up position off the pilot station, to be later joined by Atlantic Fir for docking. 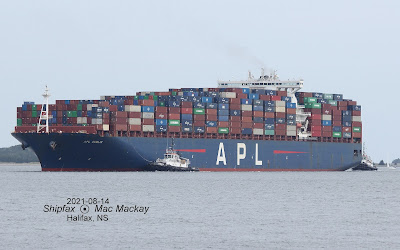 As for the mysterious ZIM Yokohama lurking offshore, it is shown on the port's arrival list for August 29. It sailed from Valencia, Spain on July 28 on its regular ZCA service. Its next port is to be New York, August 31. It is a 39,906 gt, 50,532 dwt ship with a capacity of 4250 TEU, built by Dalian New Shipbuilding, China in 2007.  It has been overtaken on its route by several other ZIM ships, including today's ZIM Monaco.