On August 20 we learned through media that the thirty day written submission period was ending the next day for the latest "plans" deposited with the Canadian Impact Assessment Agency for a major redevelopment of the southend container terminal operated by PSA Halifax. No public notice had ever been posted by the Port, thus removing any reasonable opportunity to comment or make constructive suggestions.

The submission to CIAA was verbal only, with no engineering drawings or artists renderings to show the nature of the "proposed" work at and around the terminal, changes to roads, and to CN rail lines and another, perhaps unrelated, expansion of warehouse space at P+H Milling's flour mill. It would require a fairly intimate knowledge of the facility to determine how the changes would impact the public without seeing engineering drawings. A contact address was available to an engineering firm, but there was no way anyone could see the nature of the project in the submission itself, or even to learn if there had been comments received. Apparently work will now begin almost immediately. 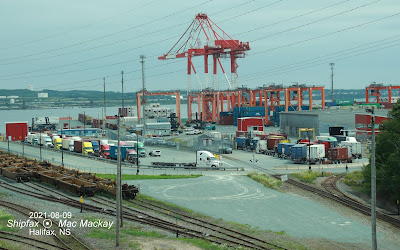 In addition to additional tracks in the terminal, the truck arrival gate will be changed and several buildings removed or rebuilt. The area can be choked with truck traffic in the present configuration, resulting in long wait times for truckers. Can you count the trucks? [I counted fifty]

The "proposed" project will mean major disruptions to truck, train and likely car traffic, but there is no explanation of how this will be mitigated during construction.  It is also stated that a pedestrian and bicycle bridge will be built to assist in crossing tracks during train shunting. However the media report August 21 suggested that the bridge may be optional, or built much later. 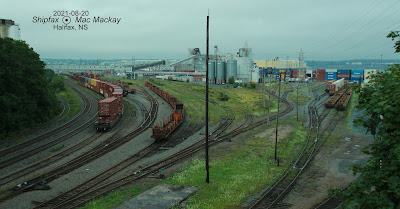 Underutilized track between the terminal and the P+H flour mill (to the right of the pole in the photo) will be removed and the area converted to port workers' parking. The mill will also be expanding its warehouse space.

Those tracks were once heavily used before the container era. Freight was moved through pier sheds to and from box cars. It took some years for the full transition to containers.

In the early days of Halterm (now PSA Halifax) there was still freight being handled from general cargo ships through pier sheds into box cars, but container cars were also showing up on the tracks. 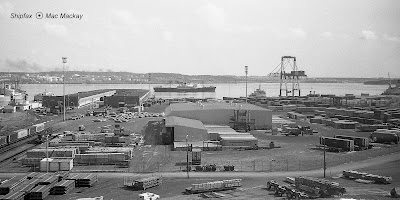 This pair of  sequential late 1973 or early 1974 photos show the original Halterm configuration, which has since been changed more than once as has the alignment of Marginal Road.
The top (colour) picture was taken from the Young Avenue bridge. The lower two (black and white) photos were taken from the Ogilvie Towers apartment building.
.
Posted by Mac at 8:33 PM