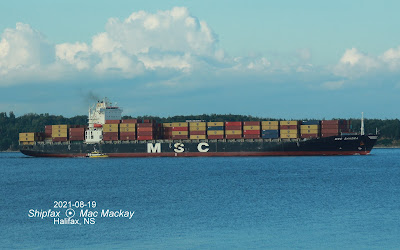 Sailing this evening the ship still had a deck load of at most five high, but generally four high. This is still more than what I have seen in the past, such as my photo of almost exactly three years ago on the St.Lawrence when it was only loaded to three tiers high - and no containers on the after deck.

The ship is quite an impressive sight (and sound) at 18 knots or more.

Halifax remains unaffected directly by port delays in the US, with such ports as New York/New Jersey and Savannah with  nine to seventeen ships (respectively) anchored offshore waiting several days for berths. There have been no diversions to Halifax, as a lot of the delays are in export cargo, due to truck and labour shortages.