It was a day for various government marine services vessels to move in and out of Halifax Harbour, and for merchant vessels to remain largely invisible.

The most notable move was that of the newly commissioned HMCS Harry DeWolf as it prepared to embark on its first mission as an Arctic Offshore Patrol Vessel. It is the first, and "name ship" of a new class of ships to be built for the Royal Canadian Navy. The ship first made a short move from HMC Dockyard to Irving Oil to top up its fuel bunkers. 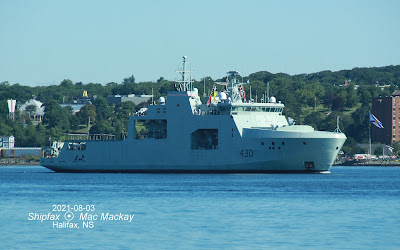 It later put out to sea on what will be an epic voyage combining arctic exercises, a transit of the Northwest Passage from Atlantic to Pacific, followed by a long west coast voyage to the Panama Canal. The ship will then participate in drug interdiction operations in the Caribbean with the United States Coast Guard before returning to Halifax completing a circumnavigation of North America.

The voyage will mark many firsts in addition to a return to arctic operations by the RCN. The navy has not had an icebreaker in its fleet since HMCS Labrador was transferred to Department of Transport in 1957. Tellingly Harry DeWolf's trip will retrace that of HMCS Labrador in 1954 when it became the first warship to make a Northwest Passage and then completed a circumnavigation of North America. Some considered the 1957 transfer of the Labrador to civilian service a slap in the face to the Navy, and a purely political move. Whatever it was, the RCN transferred its focus to anti-submarine warfare. The (previous) Canadian government's determination to assert its sovereignty in the Arctic lead in part to the current national shipbuilding program which will see more Arctic Offshore Patrol Vessels, frigates, Naval supply ships and icebreakers.

Alluding to the Canadian Coast Guard, there have been "visiting" CCG patrol boats in Halifax recently. As Halifax based boats are in refit, boats from other bases have appeared in Halifax. Today CCGC Caporal Kaeble V.C. was noted at the Tall Ships Quay. 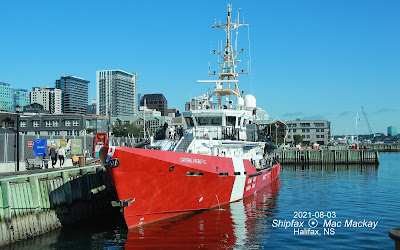 The second in the Hero class of patrol boats to be built by Halifax Shipyard, it was commissioned in 2013 and is based in Quebec City. The boat is a modified Damen Stanpatrol 4207 (42 m long by 7 m wide). The boat also carries an RCMP crew when it is engaged in law enforcement duties. However it appears to be more likely to be engaged in Coast Guard College cadet training at the present time.
Unlike the Canadian Coast Guard ships which are crewed by civilians (plus police as needed), United States Coast Guard ships are military. Two USCG vessels sailed from HMC Dockyard today after a weekend in Halifax. They had previously been exercising off Nova Scotia. 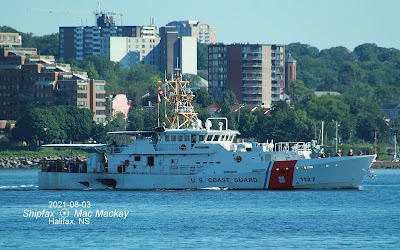 USCG Richard Snyder WPC-1127 is a Sentinel class patrol vessel commissioned in 2018. (Based on a Damen Stanpatrol 4708 (47 m long x 8 m wide), this is the size and type that the CCG should have acquired due to their better sea keeping ability.)
Here is a comparison photo of CCGS Constable Carriere taken July 27. 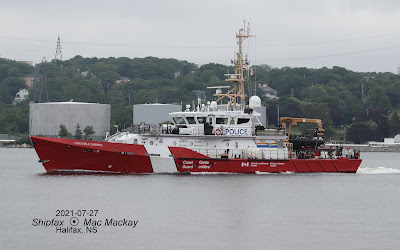 Also sailing was the Boston based USCGC Escanaba, WMEC 907, a Famous class cutter that has called here several times since it was commissioned in 1987. 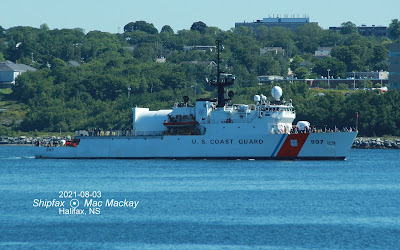 Unlike the USCG, the CCG also operates outside the enforcement sphere. Since 1995 the CCG has also incorporated the Department of Fisheries and Oceans fleet of research vessels. This included CGS Alfred Needler which arrived today as CCGS Alfred Needler. 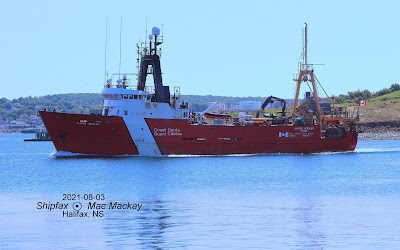 Built by Ferguson Industries Ltd in Pictou in 1982, it is a fisheries research trawler. It must be very close to decommissioning as the current National Shipbuilding procurement Strategy has completed all three of the new "Offshore Fisheries Science Vessels". The two east coast vessels, CCGS John Cabot and CCGS Captain Jacques Cartier have been delivered and are supposedly in servic, replacing Alfred Needler and Teleost. Maintenance issues with other ships, including CCGS Hudson may explain why the Needler is still operational.
The sole merchant ship movement noted today was the early morning arrival of MSC Anya which has been anchored off Halifax since July 29. Presumably it is bound for Montreal. 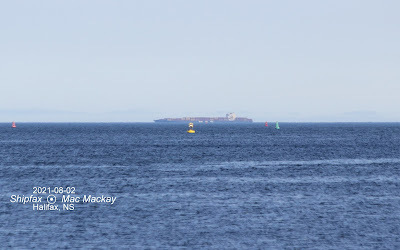 MSC Anya was visible on holiday Monday, through the haze, as it waited at anchor off Halifax.
.