Two of the facilities in Halifax harbour were busy today. Gold Bond Gypsum (formerly National Gypsum) had one ship alongside and one waiting and PSA Halifax (operators of the southend container terminal) had two ships alongside and a third waiting.

Gold Bond had been accumulating a large stockpile of material for the last several weeks: 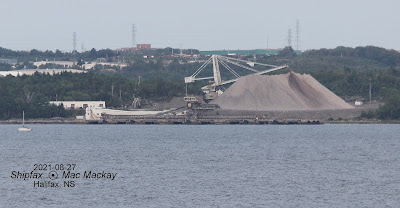 The raw gypsum ore is transported from the open pit mine at Milford by CN rail in dedicated unit trains. Cars dump their loads in the white building at left, where the material is conveyed under ground to the large stacker/crane. It is conveyed again (white structures to left of centre) to the mobile ship loader on the pier (dark structure in centre, in front of the stacker crane).

Arriving this morning, August 29, Algoma Integrity began to load immediately, and by late afternoon had reduced the stockpile noticeably. It has raised its self-unloader boom to allow the mobile ship loader to access all the ship's hatches. The loader is at about midships position in this photo, and appears to be loading the ship from aft to forward - perhaps in one pass. 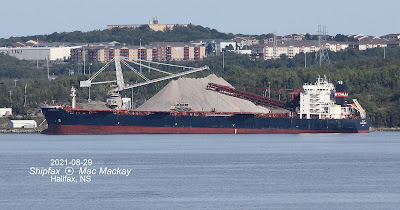 Also arriving today, Thunder Bay anchored nearby and will move in as soon as the Integrity is finished. 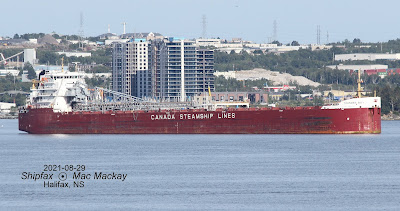 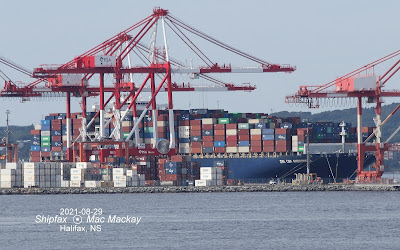 Also alongside was Maersk Penang on the east bound leg of its transatlantic regular run. Returning from Montreal its next scheduled port is Bremerhaven. 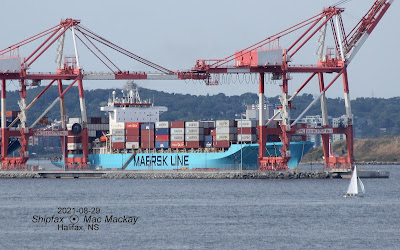 Once both ships are clear, it will be time for the long awaited Zim Yokohama to berth, now scheduled for tomorrow morning. 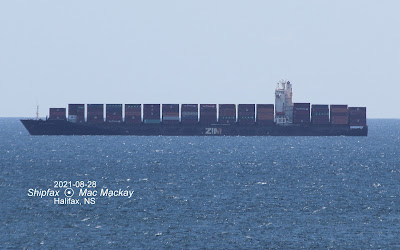 The ship has been in quarantine anchorage off Halifax since August 6 due to COVID cases among the crew.
The only other commercial activity in the harbour today was at Pier 30-31 where another regular caller, Augusta Luna, was tied up. 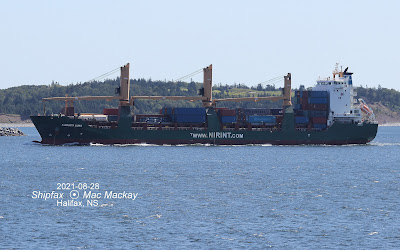 The ship arrived yesterday with another load of nickel sulfides from Cuba. The ship sails for the Dutch company Nirint Shipping BV. Cuba's economy is in paralysis, since the shut down of tourism due to COVID. One of the country's few sources of foreign revenue is the sale of nickel - although it is believed rum is still doing well. (See the container tanks on deck forward.)
.