Sized to Suit - and a moth by any other name

It was a matter of different strokes for different folks or as the British say - horses for courses - today, August 17 as bulk carriers of vastly different sizes arrived in Halifax.

Johanna C is a multi-purpose "Tween Open Hatch Box" type. It has box shaped holds, with portable tween decks, and hatches the full width of the hold. With a pair of 80 tonne cranes and 12 cubic meter grabs it is suitable for many types of bulk cargoes and all sorts of general and project cargoes. 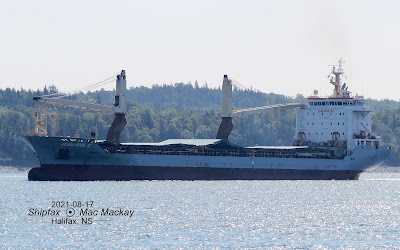 Hold cleaning and airing is underway as the ship arrives in Halifax this morning.

Owned by the British company Carisbrooke Shipping, and registered in Cowes, Isle of Wight, it is managed by SMT Shipping of Cyprus. The ship was built in 2009 by Jiangsu Yangzijiang of Jianyin, China, 9530 gt, 12,947 dwt. It arrived from Wilmington, North Carolina  to load wood pellets.

Towards the other end of the size scale the Chinese flag bulker Ri Guan Feng occupied number one anchorage for several hours. Built in 2010 by Jiangnan, Shanghai, for China Ocean Shipping Co (COSCO) is a 40,913 gt, 75,566 dwt ship of 225m over all length. That makes the ship a "Kamsarmax". The port of Kamsar, Guinea can only accommodate ships of a maximum length of 229m. As one of the busiest bauxite exporting ports in the world, many bulkers are built to suit the port. 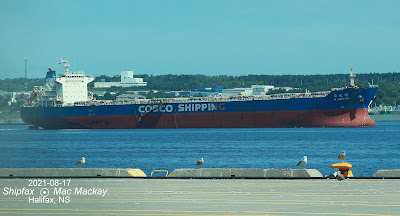 Some supervisory gulls line the seawall at pier 41-42 as the ship gets underway for sea.
Pilots face a long climb to embark or disembark while the ship is in ballast.
Indeed the ship loaded bauxite in Kamsar in July, discharged at Alcoa's refinery in San Ciprian (San Cibrao), Spain earlier this month, and sailed directly here in ballast. I imagine the ship was here for Canadian Food Inspection Agency (CFIA) clearance, before heading on for Sept-Iles, QC to load iron ore.
The CFIA inspection would be to ensure that the ship was not carrying the larvae of the Lymantria dispar, an invasive species of moth that threatens North American forests. The high mobility of the larvae, which can become air borne, gave the insect the common name of "gypsy moth". That name has now been recognized as an ethnic slur and out of respect for the Romani people (who are mistreated in many central European counties) the common name has been dropped by scientists and the Latin name, or its abbreviation L.dispar has entered general use until a new common name can be found. (CFIA does not appear have got on board yet.)
.