One of the busiest boats in Halifax is called the Sigma T, but it is perhaps not well known. Operated by the Department of Fisheries and Oceans from the Bedford Institute, it can be seen in Bedford Basin or out in the approaches on most days. 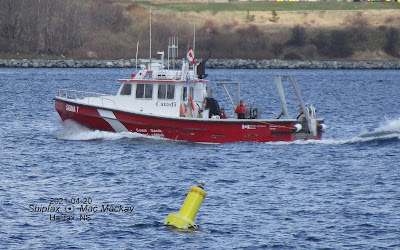 Built along modified fishing boat lines by Samson Enterprises in Arichat, NS, the boat is equipped with a small gantry and other gear to allow the vessel to carry out water sampling. The boats name represents a quantity used in oceanography to describe the density of salt water at a given temperature.
It is not the first boat to used the name. A previous boat in operation until 1999 was called Sigma-T (with a hyphen). 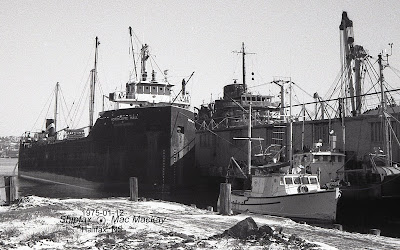 Sigma-T is seen here in January 1975 in winter layup at Purdy's Wharf with the Great Lakes vessel Northcliffe Hall preparing to sail to the Caribbean, the burned out ship Amvourgon on the south side of the pier and alongside the Fisheries Research Vessel Harengus. The Sigma-T was built in 1963 in Cheticamp, NS as Miss Valerie.
The current Sigma T appears to be in refit at BIO since mid-July, but the water sampling and measuring process goes on, I believe with the Connors Diving Services boat Eastcom filling in. 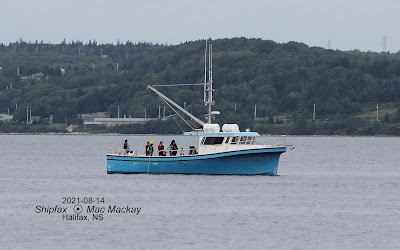 There seemed to be quite a crowd on deck - perhaps some summer students - while the Eastcom worked not far off the Bedford Institute yesterday. Eastcom was built by Millenium Marine Inc in Escuminac, NB in 2010.
.