Halifax harbour played host to three ships today that show the contrast in sizes of vessels that the port can handle.

Aristomenis is a 9954 TEU ship, built in 2011 by Samsung Shipbuilding and Heavy Industries Co Ltd in Koje. At 113,515 gt, 118,712 dwt , it is far from the largest container ship to call in Halifax, but it is too large to reach the Cerescorp terminal at Fairview Cove. The shipping line THE Alliance therefore arranged for the ship to berth at the PSA Halifax terminal instead. The normally competing terminal is unencumbered by bridge clearances or other restrictions and has handled ships in excess of 175,000 gt and 16,000 TEU capacity. 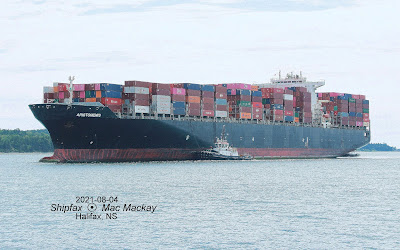 The auto carrier Morning Cornelia docked at two different facilities in Halifax. First it went to Pier 31 in the deep water piers area to off load "high and heavy" or other wheeled RoRo cargo such as machinery. 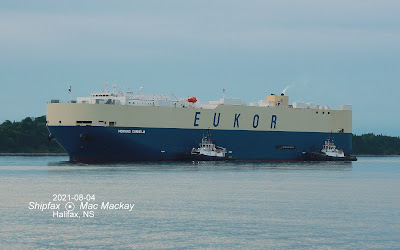 Later in the day the ship shifted to Autoport where it will unload the automobiles.
The ship was previously here January 18, 2021.
Late this afternoon the general cargo ship Enna docked at Pier 9A alongside the offshore construction vessel SIEM Dorado (see July 31). 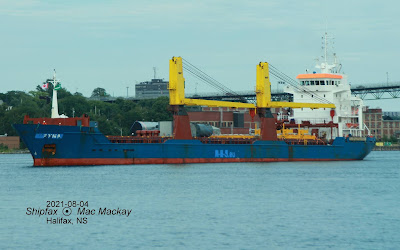 A 2007 product of the Bodewes, Hoogezand yard, it was launched as Lifter but delivered as Hartwig Scan. It carried that name only briefly in 2007 when it reverted to Lifter . On July 1 of this year it became Emma. It appears to have put to sea with the paint still wet, as some of the new name has washed off.  It is a 4990 gt, 7778 dwt general cargo ship with a pair of 34 tonne capacity cranes. It has some tanks and steel fabrications on deck, but these may not be related to the work on SIEM Dorado which is undergoing conversion to a temporary cable ship.
.