Halifax has frequently hosted cable ships, going back to the early days of the technology. Western Union, the French cable company and others have made Halifax their base. In recent years IT International Telecom has established its marine base here and IT ships are in and out of port regularly. Their IT Intrepid is currently in port as is the offshore supplier Siem Dorado undergoing conversion for cable work. The general cargo ship Enna is still alongside the Siem Dorado possibly transferring cable or other gear. 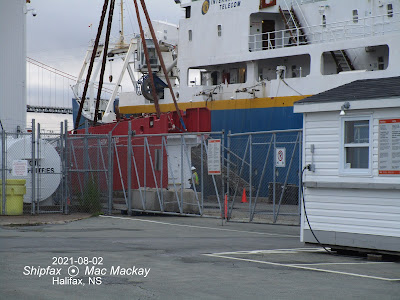 A crane has lifted off a section of gunwale or transom from Siem Dorado and is landing it on the dock next to IT Intrepid at Pier 9A.

On August 12 another cable ship arrived, but for a completely different company. The Marshall Islands flag Durable is owned by Transoceanic Cable Ship Company LLC, a US corporation, with bases in Baltimore, MD and Honolulu. 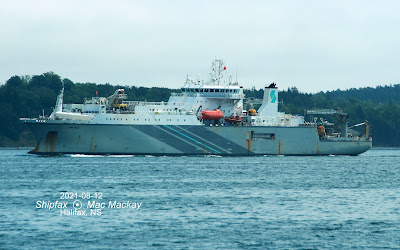 The ship was built by Keppel Hitachi in Singapore in 2002 as the Tyco Durable. When Tyco became over extended and failed, the ship was sold and renamed in 2010. Transoceanic has a huge contract with the US Navy, signed in 2018 and extending to 2023. Presumably it involves maintaining seabed communication and monitoring systems.

The Cable Wharf, adjacent to the Halifax ferry terminal, still uses the name, but has not been used for cable since the 1960s. It was once the Western Union wharf, and had a large storage building for cable and other equipment, and was the base for two famous cable ships the Cyrus Field and the Lord Kelvin. My 1971 photo of the "ferry plaza" between the Law Courts and  Queen's wharf is barely recognizable today. 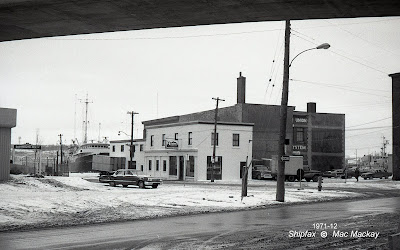 Taken from beneath the Law Courts bridge across Water Street, the white building is the Fisherman's Market - most recently Nova Scotia Crystal. The Western Union building - long since demolished - is in the background.

I have published the following photo before, showing the cable ship Lord Kelvin arriving in Halifax in 1955. 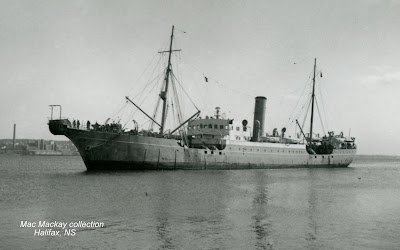 There are several interpretive plaques on the Cable Wharf outlining the history of subsea cables.