It was a busy Monday in the port with almost all facilities seeing ships alongside. Although rainy, misty and at times foggy in the morning, the weather did clear later in the day allowing for some photos. 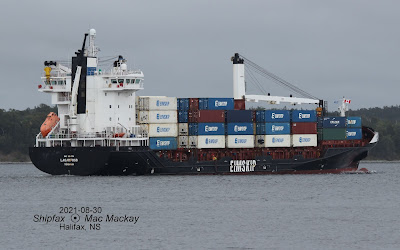 Eimskip also offers a New England feeder service to other shipping lines, but today the ship looked fully loaded (at least on deck) with Eimskip boxes.
Built in 2014 by Rongcheng Shenfei Shipbuilding Co in Rongcheng, China, Lagarfoss is a 10,119 gt, 11,811 dwt ship with a capacity of 880 TEU. It also carries a pair of 45 tonne capacity cranes.
The autocarrier Torrens arrived early in the morning at Autoport to discharge cars, then moved to Pier 27 on the Halifax side of the harbour to unload machinery. Its usual Ocean Terminals berth at Pier 31 was occupied by Augusta Luna (see yesterday's post).

Because the ship's 237 tonne capacity stern ramp is angled to starboard, the ship must berth bow in when at Pier 27. At Pier 30-31, it berths stern in, which is a more convenient arrangement for cargo work.

Both oil docks had "customers" today. Irving Oil's Woodside terminal saw the company tanker East Coast on its customary "milk run" to several regional terminals. Its last port was Charlottetown. Later in the day the tanker Mitera arrived from Amsterdam and anchored awaiting the berth to clear. It may also have required CFIA inspection for  L. dispar clearance.[ see August 18 explanation for the new terminology]. 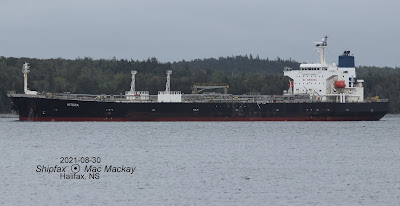 Unlike most product tankers, this one was not built in Korea. It comes from the Onomichi Zosen in Japan, where it was built for MOL as Pioneer Express. The 26,938 gt, 47,370 dwt ship was acquired and renamed by present owners Olympos Shiptrade Co Ltd in 2019.
Meanwhile Imperial Oil had its own version of product tanker - also non-Korean. The Swedish flag Wisby Pacific dates from 2017 and the Guangzhou International shipyard in China. A 29,681 gt, 49,686 dwt vessel it has a distinctive wide wheelhouse as compared to the previous vessel. 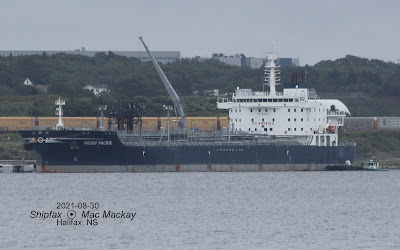 The ship arrived from Beaumont, TX and tied up at number 3 dock. The rail siding behind the dock is lined with autoracks ready awaiting loads from Autoport.
.