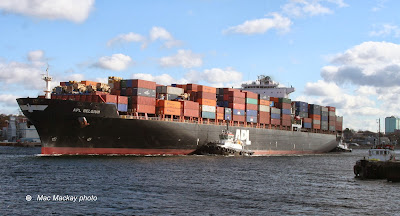 APL Belgium slides up through the Narrows this morning, with tugs in attendance and into a stiff head wind. The big ship was built in 2002 by Samsung Shipbuilding + Heavy Industries of Koje, South Korea, and operated for APL under the Singapore flag until July 1, 2013.
On that date it moved to direct APL ownership under the US flag for the G-6 Alliance "AZX" service, running ten ships from Asia to east coast of North America. As a US flag carrier, it is now eligible to carry US military cargo, including several strange looking vehicles in very exposed positions atop the container stacks forward. I am sure they will be thoroughly drenched in salt spray by the time they reach their US destination.
At 65,792 gross tons, with a capacity of 5762 TEU (including 656 reefers) it is slightly smaller than the Hapag-Lloyd ships in the Alliance.