1. Oceanex Connaigra this morning with container loaded on deck.

Oceanex Connaigra arrived back in Halifax today on the return leg of its first cargo trip. It is due to sail again on October 18 for St.John's. According to the latest Oceanex schedule it will then sail October 20 from St.John's for Montreal, arriving there October 23.

The schedule also shows Oceanex Sanderling returning to service for an October 25 sailing from Halifax. That means a much shorter drydock time than I had predicted in my prior post.
Once Oceanex Connaigrea shows on the Montreal schedule, Cabot's name has been dropped, so it seems that her Oceanex career has come to an end.. 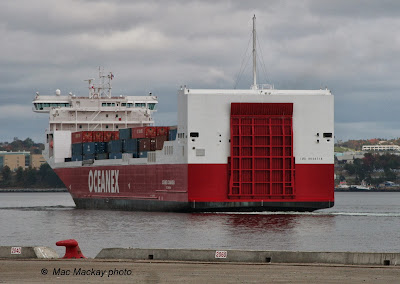 2. Turning to back in to pier 36, the ship shows its large stern ramp. 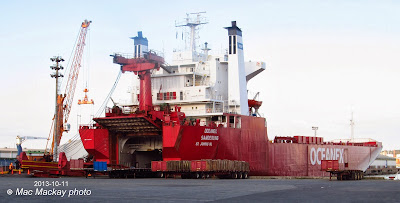 3. By comparison Oceanex Sanderling's stern ram is a bit narrower.