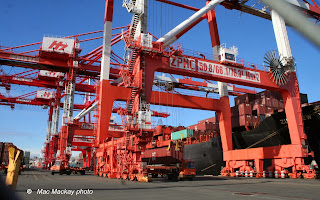 Back in 1975 Halterm had three cranes available to work a ship of the same name. 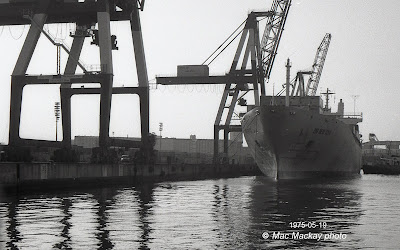 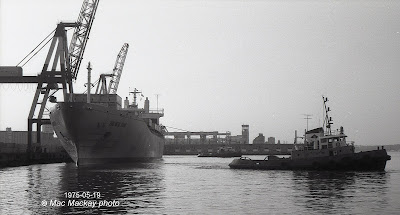 The first Zim New York was built in 1972 by Italcantieri Spa of Genoa as Thermopylae, but was sold to Zim while fitting out. It measured 25,831 gross tons. In those days the TEU capacity was not published in Lloyd's Register.  Soon after the ship went into service, Zim added a secondary wheelhouse above the main bridge, to allow for additional container stacks on deck. Its capacity was then listed as 1426 TEU. It was also a steam ship, powered by a 38,000 shp steam turbine. The ship lasted until 1991 when it was broken up in Kaohsiung.

In those days the breakwater had a small lighthouse on the end and was a gathering spot for fishermen and ship watchers. It also extended out beyond the Halterm pier face.