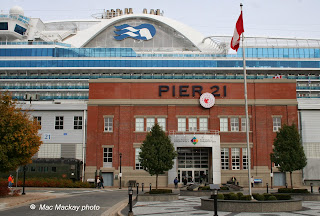 The last cruise ship of the season, Emerald Princess sailed after dark this evening.

Looming over the pier 21-22 area, Emerald Princess is the second largest of the big ships that find Halifax a desirable port call every year. It claims 3100 passengers (Explorer of the Sea claims 3114).
Built in 2007 it measures 113,561 gross tons and also has a nominal capacity of 3114 passengers.
The ship made its inaugural visit to Halifax September 25, 2011. Last year it re-routed to the Saguenay River on its way from Quebec City to Halifax to avoid the tail end of Hurricane Sandy. It arrived here November 1, 2012, one day later than its schedule.