The cargo Lady Remington III, idle in St.John's since its arrival there in March 2012 has a new name and new owners. Now, Panamanian flag, with owners associated with Mermaid International Shipping + Trading of Piraeus, Greece,  the ship has been renamed Navi-Wind. 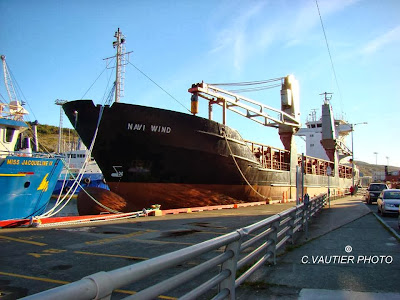 Built in 1984 by J.J.Sietas in Germany, it is a ship of 3120 gross tons, 4281 deadweight and carries two 30 tonne cranes. It had 11 previous names before becoming Lady Remington III in 2012. Owners were listed as Remstoan Investments Inc, with Vanguard Shipping Great Lakes Inc, a Canadian company, as managers. About the time the  ship arrived in St.John's "for orders" the Vanguard parent company entered creditor protection and was eventually wound up, with its two Great Lakes ships sold off. Lady Remington III  was not involved in the bankruptcy, but remained idle.
While in St.John's the ship may have been in the care and keeping of Northern Transportation Ltd, but they did not operate the ship, and it has been alongside ever since.
Earlier this month the new name appeared, leading to the expectation that the ship will sail soon.