The newest Canadian Coast Guard cutter, CCGS Corporal McLaren M.M.V., was registered in Ottawa on October 28, signifying that it has been handed over by Irving Shipbuilding Inc. The boat is still alongside the pier 9B fitting out berth,but it has conducted sea trials and boat trials. The latter involved launching the fast rescue craft and rendez-vousing with a civilian helicopter on October 24. I have never seen this particular trial carried out before.


1. Heading for the Basin, October 24, with the crew readying the fast rescue craft for trials. 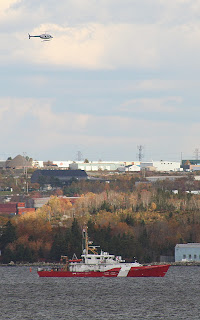 2. Non-military, non-CCG helicopter passes over the FRC, which is hidden from the camera, on the other side of the ship. 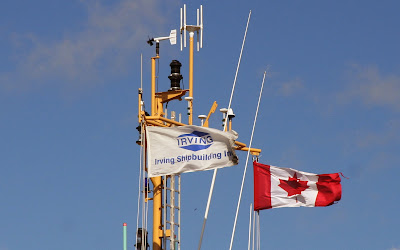 4, During trials, and before handover, the ship flies the Irving Shipbuilding Inc flag.
Posted by Mac at 8:21 PM