Early this morning the gearless cargo ship Zeus arrived and squeezed into pier 28. By the start of the work day its hatches were open and it was ready to load wood pellets or grain. Owned by BBS Bulk VIKS, the ship forms part of the 50 ship strong Flinter Group fleet of Barendrecht, Netherlands. 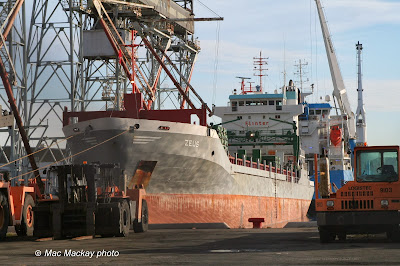 Built in 2000 by Ferus Smit shipyard in Hoogezand (although its hull may have been built offshore) it measures 6142 gross tons and 9100 deadweight. It has no cargo handling gear, but a hoist, which travels on deck rails, is used to lift and stack its pontoon type hatch covers.  Its box shaped holds are ideal for grain and other bulk cargoes, but also break bulk such as timber and project cargo.

It joins Zeelandia, a regular caller for Nirint Lines, which is unloading nickel sulfides from Cuba at pier 31. Nirint Lines is a Dutch company, but the ship is owned and flagged in Switzerland. See also http://shipfax.blogspot.ca/2012/04/nirint-zeelandia-hurry-up-and-wait.html for a photo of the ship underway. (It was called Nirint Zeelandia previously.) 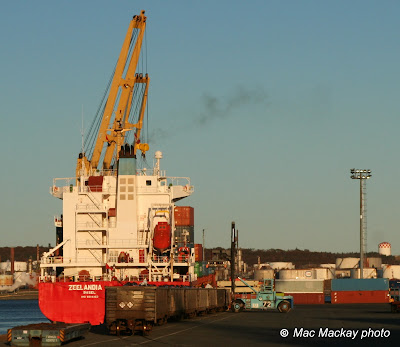 Zeelandia completed unloading and sailed late this afternoon. The bagged nickel is loaded onto rail cars for transport to Fort Saskatchewan, AB for processing. Built in 2005 it has carried the names Safmarine Basilea, SD Basliea and Nirint Zeelandia since it was built in 2005 by Kyokuyo Shipyard in Japan.. It measures 9990 gross tons, 12,500 deadweight and carries its own cranes of 80 tonnes capacity.

Third ship in the trio is Anet at pier 27, which appears to be loading a project cargo. 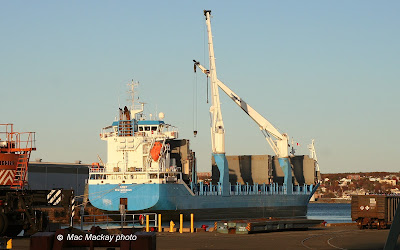 Built in 2010 by Damen Shipyard of Gorinchem, Netherlands (although its hull was likely built in Poland or Romania), it measures 8999 gross tons, 12,080 deadweight. It carried the name Onego Bilbao from 2010 to 2011, but is now part of the 180 ship strong Wagenborg fleet, which manages the ship on behalf of its owners, BOS EAK. (Many Dutch ships are owned by consortia of small shipowners, and are chartered to the larger fleet operators.)   The ship has folding hatch covers and two cranes of 80 tonne capacity each.