The end of the cruise ship season is upon us. The Emerald Princess, due October 31, is to be the last for this season, which saw the first ship arrive May 6. With 136 visits scheduled, 2013 stands to be another record or near record year for passengers. (In 2012, the previous record year, there were 134 calls with 252,000 plus passengers.)
Today saw two ships bidding farewell. Seven Seas Navigator 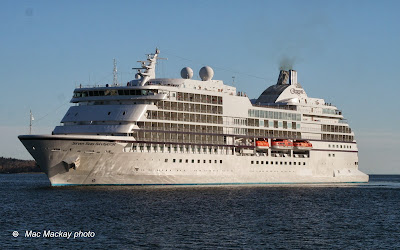 1. Seven Seas Navigator getting away from pier 20, made a slow departure to allow for a an unaware yachtsman to get out of the way.

Laid down as Akademik Nikolay Pilyugin by the Admiralty Shipyard in St.Petersburg the ship was originally intended to be a naval support vessel. Those plans were changed and the ship was completed by the Mariotti yard in Genoa as a cruise ship.Radisson Seven Seas Cruises operate the ship from 1999 until 2006 when it was sold to current owners Regent Seven Seas Cruises. Promoting its crew to guest ratio of 1:15, the ship carries only 500 passengers, and many of the cabins have private balconies.
In 2010, with the intention of addressing severe stern vibration issues, the awkward sponson structure was added by Lloyd-Werft in Bremerhaven. The work also included new rudders and props. While the work helped the ship's maneuverability and speed through the water, there are still vibration problems according to some sources. 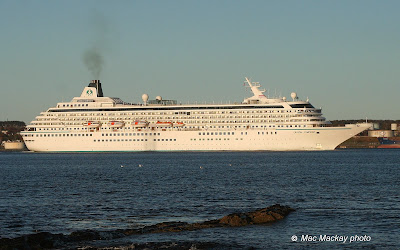 2. Crystal Symphony makes her way outbound, with the shadow of the old Haltern crane falling just aft of amidships.

Built in 1995, Crystal Symphony, with 940 passengers is not among the newest or largest ships by far, but is one of the better looking ones, - free of all the extra graphics, and with remarkably clean and relatively unbroken deck lines.