1. Anet at pier 28 soon after arriving on Tuesday.

The question of what the Anet is here to load was answered today with the arrival of rail cars carrying gigantic windmill blades. Usually an import cargo, these blades are for export. They came on specially fitted rail cars (two cars per blade) and supporting frames, that allow the cars to articulate around curves. 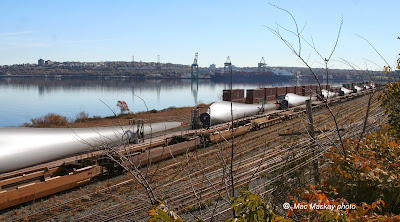 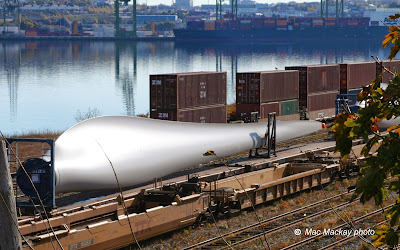 4. The last cruise ship of the season, Emerald Princess, in the background, with three more blades on rail cars in the "downtown" ocean terminals yard.

The blades appear to be too big to wiggle in through the ship's hatches, so may be loaded on deck, using the special frames to stack them. The blades seem to be about 120 feet long.

Seaforth Energy Inc of Halifax is a local builder of wind turbines, and sub-contracts blade construction to DSTN's Trenton, NS, plant called DSME.
REVISION
In fact Anet DID NOT load the blades - she took a bulk cargo of grain or wood pellets- the blades remain in port-likely to be loaded on Saudi Hofuf due on the weekend of November 9-11.