Another load of rails arrived this morning, following close on the heels of a previous load that was discharged from Onego Trader from September 25-October 3.

Capri, flying the flag of Antigua and Barbuda, is another general cargo ship of the same general configuration, with box shaped holds and two 40 tonne cranes. It is fitted with pontoon type hatch covers, that are moved by a traveling deck crane, and allow completely open access to the ship's two holds.
Capri is owned by the Eckhoff  + Co of Jork, Germany, a shipping company of long standing, tracing its roots back to 1896. Its fleet is generally similar, to this ship, and are chartered out to several different operators. This ship may be on charter to Onego, which seems to handle most of the rail imports for CN.

Built in 2002, the ship measures 6806 gross tons and 10,273 deadweight. It also features a large turtle back cowl over the forepeak to shelter it from seas. The green box shaped structures on deck house ventilaiton units for the hold. 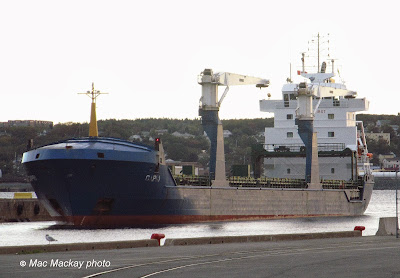 The ship was built by the Korean Shipbuilder Daewoo Heavy Industries, but not in Korea. Their modern shipyard in Mangalia, Romania turned out this ship.