Looking back through my records for December 1973, there are a lot of now dimly remembered or forgotten merchant ship names, none of which are still in service.

Such is not the case among naval vessels. Ships participating in Marcot, a three week naval exercise involving the RCN, RN and USN returned  to Halifax. HMCS Preserver, Annapolis (leader), Iroquios (leader) Assiniboine, Margaree, Nipigon, Qu'Appelle,  Okanagan, Onandaga, and Athabaskan arrived December 14, with Algonquin and Yukon to return December 17. HMS Ashanti did not come in to Halifax as far as I can tell. The USN participated with an Orion aircraft.
( I believe this was the first exercise for the new Tribals.)

I don't have photos from December 1973, but I have some that are relevant.

The Tribal class destroyers Iroquois and Athabaskan and the supply ship Preserver are still with us, and will be for some time to come as controversy still surrounds their replacements.

2. Protecteur and Preserver together at Imperial Oil while fueling in 1982.

Not surprisingly the Canadian Auditor General has now come out and stated that Canada will be paying a huge premium to build new supply ships in Canada. He faults the National Ship Replacement Strategy (NSPS) for the way it has picked two shipyards and other critics claim that Seaspan and Irving Shipbuilding have been given blank cheques to build ships without competitive pricing.

Our government knew that the political importance of building these ships in Canada would have a higher price tag. Not only that, they had to make up a huge deficit in Canadian shipbuilding capacity because previous governments failed to act on ship replacement, allowing the yards to die. Blaming the government for not knowing the size of that premium is a little self-serving in my opinion. Surely the AudG knows that there is no naval program anywhere in the world that is not plagued with overruns, delays and escalations. Name any country you like and naval shipbuilding is a controversial subject. The government needed to act, they chose a "no favouritism" method of selecting the builders and got the program moving, by first rebuilding the shipyards  The old method of calling for competitive pricing for a design package obviously did not work in the past -and would mean endless delays which would cost even more if allowed to continue.

The Auditor General would be well advised to comment and make recommendations on cost control measures to be put in place during the program, rather than carping about decisions that have already been made on a political basis. No sound business case could ever be made for building these ships in Canada - but the need to have a Canadian shipbuilding industry is a matter of sovereignty and patriotism. In an era of exporting technical and manufacturing jobs from Canada to the Third World, it makes political sense to create jobs in Canada. It also allows to keep a little corner on our needs without having to rely on other countries. 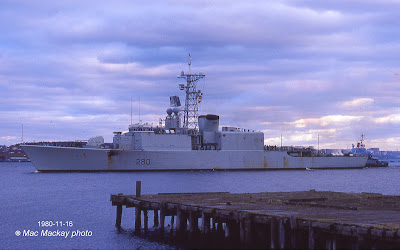 3. Pre-TRUMP Iroquois makes an early morning arrival in Halifax in 1980. The destroyers may be among the last ships to be replaced in the NSPS. They lost their distinctive canted funnels in that refit.